City Park: An Oasis in the Wilderness

A portion of this article by former Museum Archivist Kristine Haglund originally appeared in the August/September 2010 issue of “Catalyst.”

The Museum has made its home in City Park for more than 120 years. City Park is a wonderful oasis in Denver’s urban jungle, so it’s difficult to imagine that it began as a semi-arid wilderness on the high plains.

In the early days of Denver, following the 1859 Gold Rush, the lives of settlers were all about making money, if not from mining gold, then by providing supplies and services to the miners and each other. During the 1860s, Denver struggled simply to maintain its population of about 4,750 as speculators moved on in search of the next great opportunity. But once it appeared Denver would both survive and grow, successful businessmen began to imagine a lively city that would attract more residents. The city’s helter-skelter development and the semiarid wilderness of sagebrush, sand and buffalo grass created a longing for the greenery and pastoral beauty many had left behind in the East.

In an 1872 address Denver’s Mayor Joseph E. Bates suggested that the still infant town needed parks. A couple of years later, William N. Byers, editor of the Rocky Mountain News, proclaimed that Denver would not be a perfect city until, “a public park is provided like Central Park on Manhattan Island.”

Pro-park views prevailed and in 1878 the state legislature approved a bill allowing Denver to purchase 1,280 acres of state school land to develop a park around Sloan’s Lake on the west side of town and another park on the East Side of town. But it wasn’t until 1882 that Denver actually purchased 320 acres for what would become City Park, at the very reasonable cost of $56,000 (nearly $1.3 million in today’s dollars).

While the idea of making Colfax Avenue into a parkway didn’t quite work out as envisioned, the esplanade leading from City Park to Colfax past East High School is a vestige of the parkway plan and, in 1907, turned a trash dump into a far more attractive entrance to the park.

Clearing the land was another matter. It wasn’t until most of the land claims by early settlers were resolved in 1889 that development of the park could begin in earnest.

First, however, it had to be a place where people wanted to go. It needed trees for shade, grass for picnics, roadways for driving and paths for walking. Colorado’s first Arbor Day in 1885 began an annual tradition for schoolchildren to plant trees in the park. Trees and grass required water, so the City Ditch, which flowed from the South Platte River and irrigated farmland as well as Denver lawns, was designed to terminate in City Park, where it provided water for irrigation and fed the [manufactured] lakes. 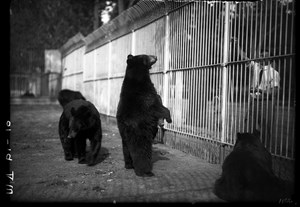 During its first 25 years, City Park developed into a Victorian park similar to New York’s Central Park. The Museum was established in 1900 and opened to the public in 1908. By 1911 amenities included the Museum, the zoo, Duck Lake, Ferril Lake with a prismatic fountain, sculpture and monuments, a lily pond, band concerts, a horse and harness racetrack, picnic facilities, trees, grass, benches and water fountains for people and horses! The Denver Zoo began as an 1896 gift to the Denver mayor of a black bear cub, which was put under the care of a farmer still working the land on the southeast corner of City Park.

City Park was Denver’s first public park, intended for all its citizens, and remains Denver’s largest non-mountain park and a gem of the Denver park system. It is a place where visitors can both enjoy today and reflect on Denver’s past.

In partnership with Denver Parks & Recreation, your Museum has exciting plans for the redevelopment of a portion of the park. After receiving feedback from more than 800 community members, we have finalized designs and will begin construction later this year. Community members expressed strong desires for inclusive, multigenerational, multi-seasonal play, along with opportunities for learning, respite and engagement through natural, playful experiences for people of all ages and abilities. With these features leading the design direction, the 4.5 acres on the southwest corner of the Museum, will be redeveloped to explore Colorado’s diverse ecosystems, bring the iconic features of the Explore Colorado diorama hall to natural play elements and restore the historic Box Canyon Waterway as a sustainable creek bed whose waters will meander through the space.