Collection’s homecoming made possible after decades-long loan with completion of Avenir Collections Center.

About three hours east of Denver lies the small town of Wray, Colorado, the seat of Yuma County, with a population of just over 2,000 residents. Not terribly far from Wray lies one of the most important Paleoindian archaeological sites in North America—the Jones-Miller Site, named after the landowner and original excavator of the site. It is located on a terrace above the Arikaree River; the bone bed is roughly 30 meters long by 20 meters wide.

Archaeologist Dennis Stanford of the Smithsonian Institution in Washington D.C. led the excavation of the Jones-Miller Site during three field seasons in 1973, 1974 and 1975. After excavation, the Denver Museum of Nature & Science loaned the collection to the Smithsonian, where it remained for more than four decades. In 2017 and 2018, the Museum’s anthropology staff worked with the Smithsonian staff to pack and ship the collection back to Denver so that we can finally put it into state-of-the-art Avenir Collections Center. (Prior to completion of that facility in 2014, we did not have space to store the Jones-Miller Collection. So the Smithsonian did us a favor!)

The Jones-Miller Site includes the remains of nearly 300 butchered Bison antiquus, an extinct form of Ice Age bison. The site is widely recognized by professional archaeologists as the most important Hell Gap period (ca. 10,500–11,500 years ago) bison kill site in North America.

Despite the undeniable importance of the Jones-Miller Site to American archaeology, its full story has yet to be told.

The collection has never been properly and completely inventoried, cataloged or published. The information within the collection remains unavailable to scholars, Indigenous cultural experts and the public. An even more pressing risk is the loss of intellectual control of the collection—many of the people who excavated the site, including Dennis Stanford, are now gone. Thankfully, Stanford and Pegi Jodry, his wife and colleague, oversaw production of a book manuscript consisting of chapters by various specialists. Given the immense amount of work that went into that manuscript, we will publish it as a preliminary report with a revised introduction before undertaking a comprehensive, new analysis using modern techniques.

The Jones-Miller collection includes more than 100 discarded projectile points and another 100 or more scrapers, knives and other stone tools from the Hell Gap Complex, the name archaeologists have given to this technology. The raw material for those points comes from sources across the High Plains and into the Great Basin; and from Northern Colorado to the Texas Panhandle. It is a huge area for humans to cover entirely on foot!

This accumulation of stone tools and animal bones probably represents two large-scale bison butchering events scattered over an unknown number of years. (Tooth eruption data indicate at least one fall event and at least one spring event, but we do not know, and cannot tell, if those events took place during one calendar year.)

The collection constitutes an unparalleled opportunity to understand bison herd composition, hunting seasonality, and slaughter and processing techniques during the last Ice Age. It also offers insights into the mutual ecodynamics of Native American and bison populations during a critically important but poorly understood period in North American history. Sadly, we do not know where the people who did the butchering camped. Stanford and his team searched and searched, to no avail.

In October 2021, the Museum received a grant of $206,933 from the Save America’s Treasures program, a federal grant program jointly run by the Institute of Museum and Library Services and the National Park Service. This grant will allow us to hire two archaeologists to work on the collection for the next two years. They will inventory, catalog, and rehouse the collection in archive quality packaging, input all the site data into a relational database, and lay the foundation for publication of a comprehensive, modern analytical report on the Jones-Miller Site and its collection for the first time ever. It’s going to be an exciting two years, so keep an eye on these pages to learn more! 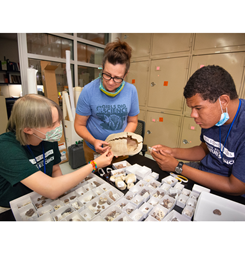 In 2021, your Museum was awarded six federal grants totaling more than $1.1 million. This funding helps support everything from debuting the story of the Jones-Miller Site collection and preserving paleontological fossils to measuring the meaningfulness of a museum experience and supporting the next generation of scientists through paid internships.