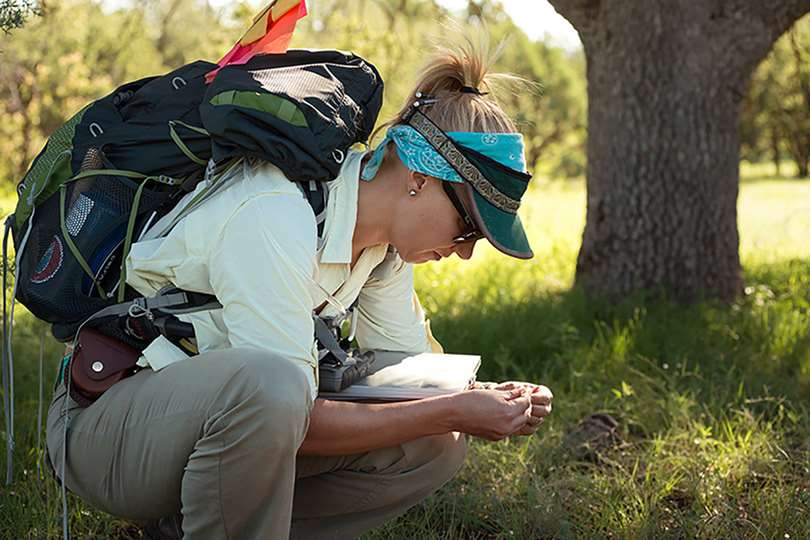 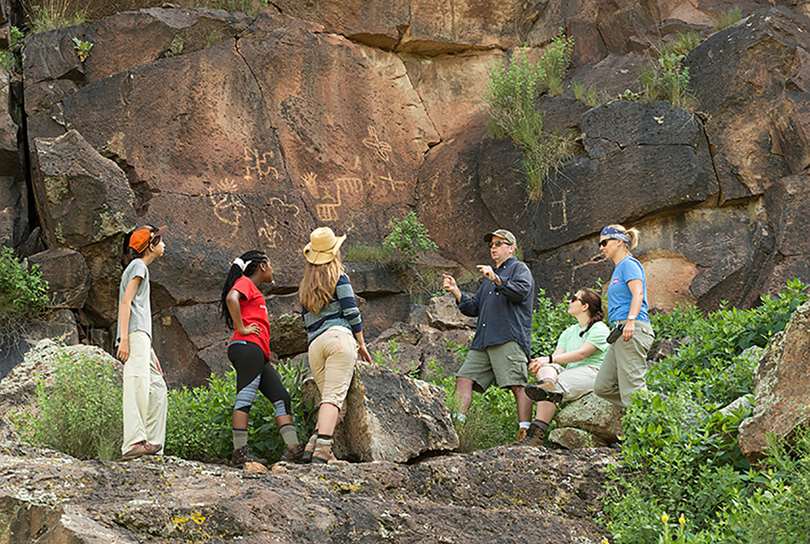 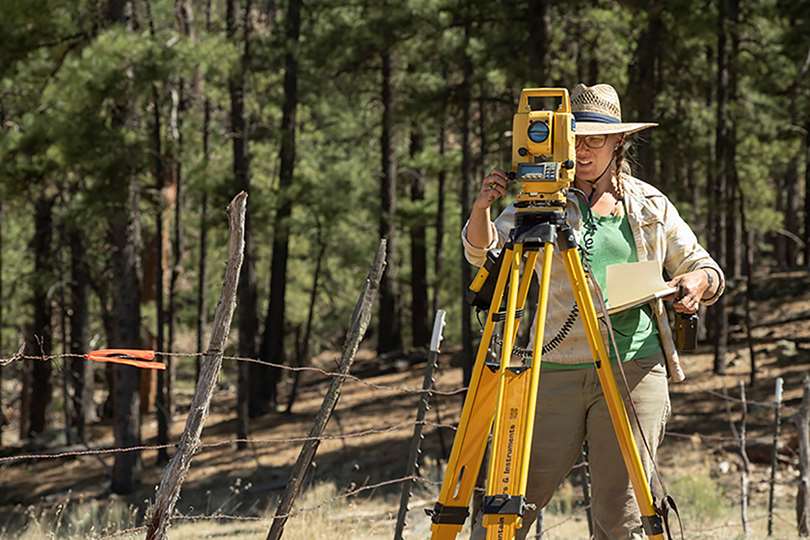 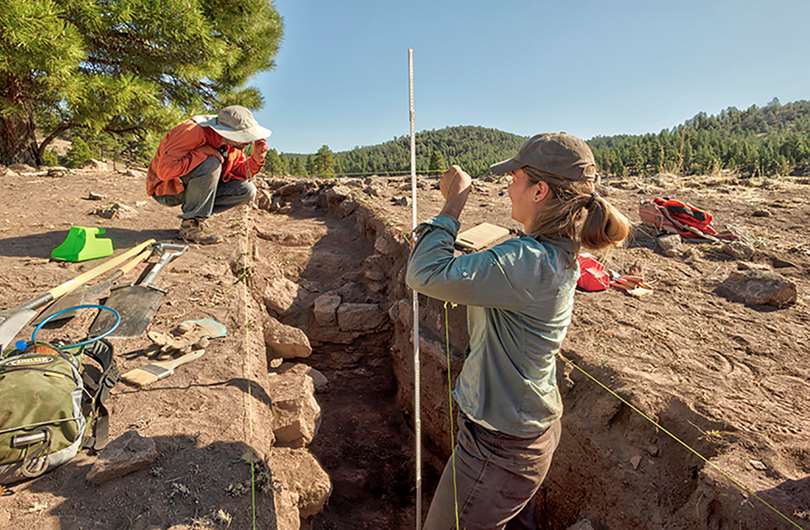 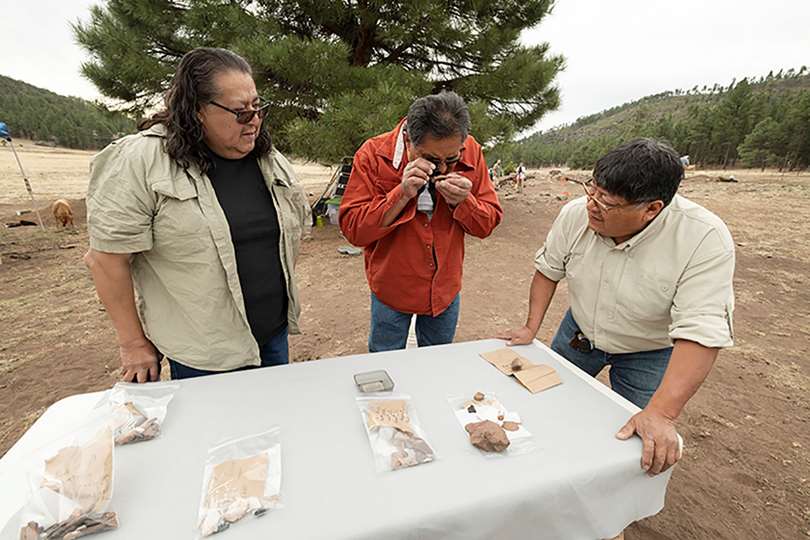 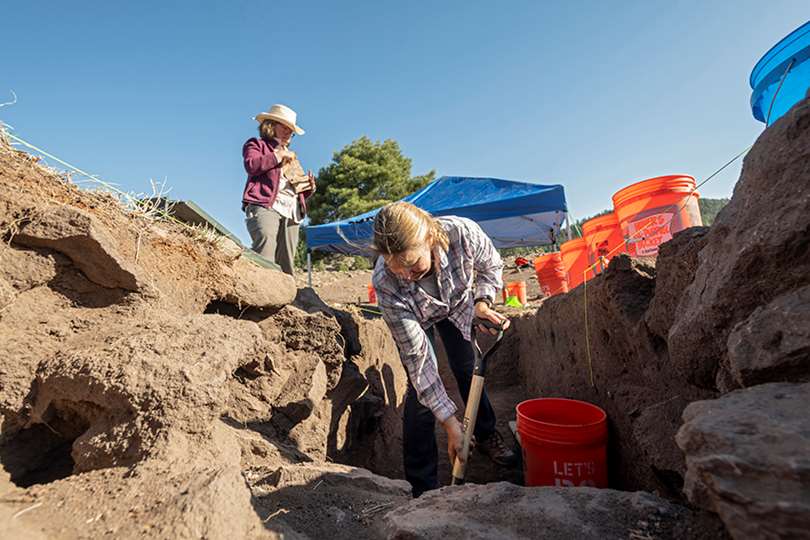 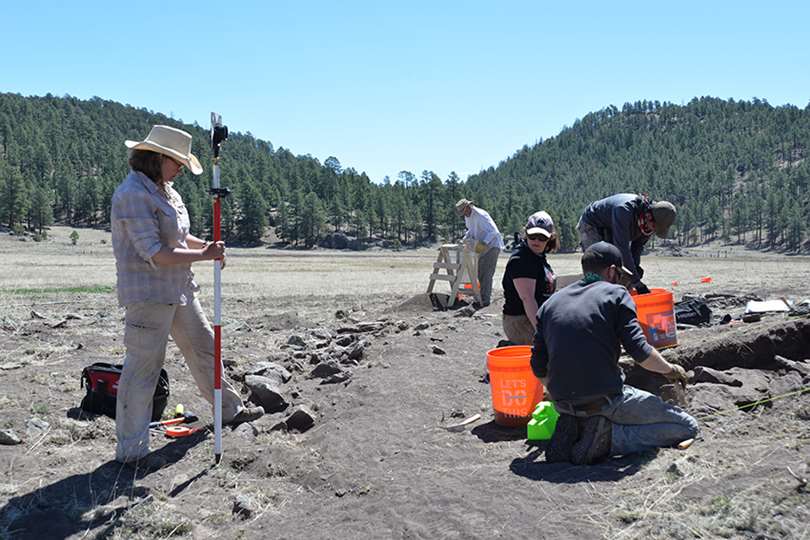 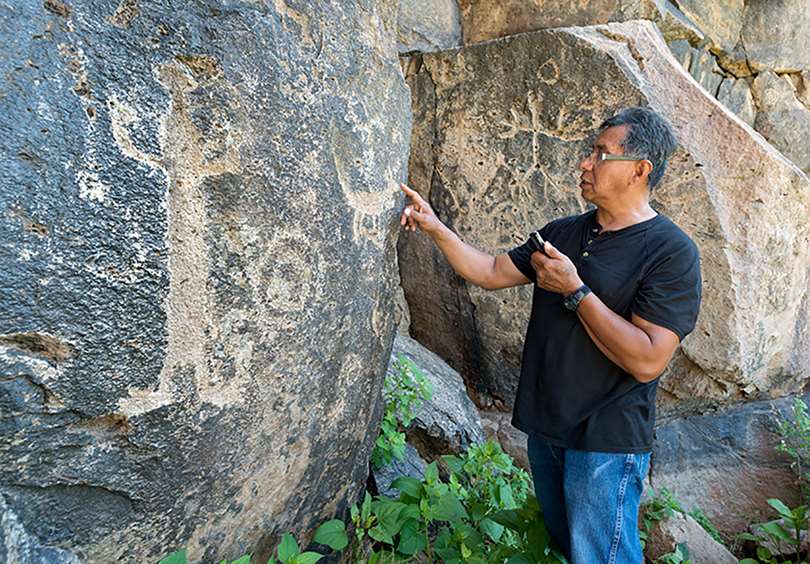 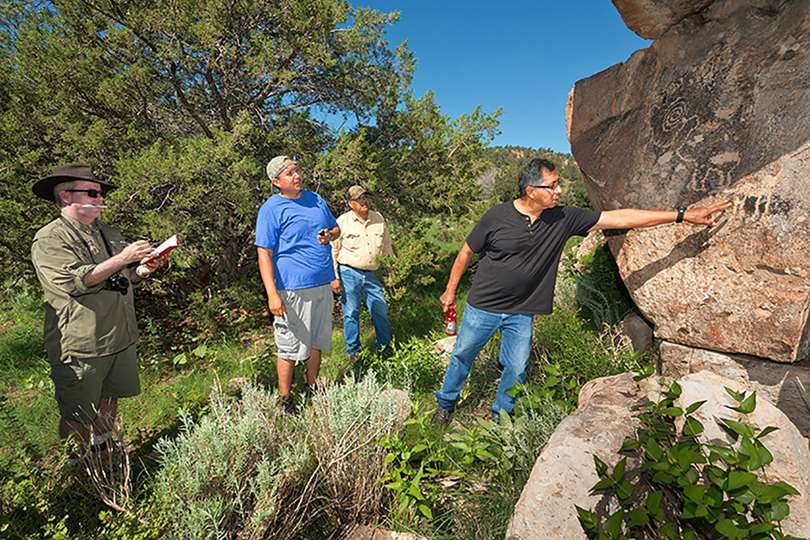 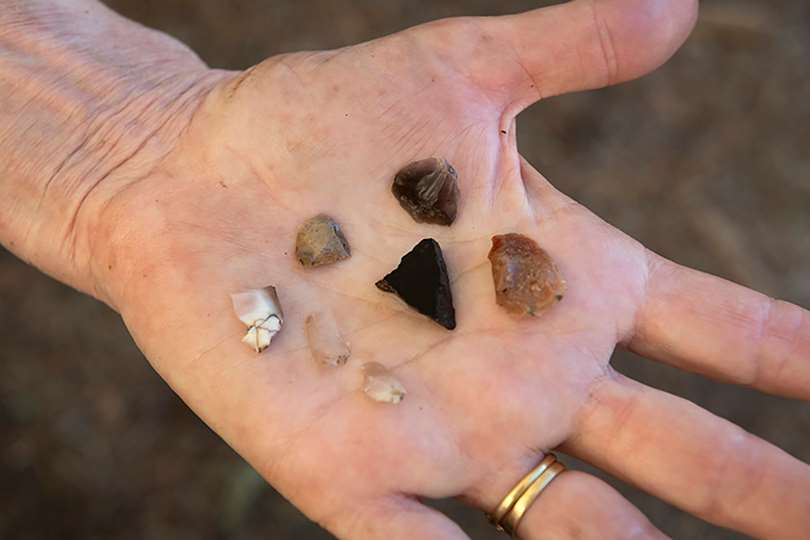 The Reserve Area Archaeological Project (RAAP) is investigating changes in population density, settlement location, subsistence strategies, paleoclimate, social dynamics, resource availability, and the structure and practices of communities in the mountainous Gila National Forest near Reserve, New Mexico. Our work focuses on the Pithouse through Pueblo periods (ca. 200–1350 CE) in this region. Little archaeological research has been undertaken in this area since the 1950s, and there is still much to discover about how people lived there in the past. This project brings together many datasets, including existing collections in Chicago’s Field Museum that were excavated between 1939 and 1955, Geographic Information Systems data from the US Forest Service, paleoclimate data, and new research that focuses on noninvasive methods and excavation. To date, fieldwork has consisted of relocating and rerecording archaeological sites, locating new sites through pedestrian survey, employing remote sensing techniques (including ground-penetrating radar) at some of the sites, and excavation at the Torriette Lakes Great Kiva site. Our work is made possible through collaborations with the United States Forest Service, the Zuni Tribe, Deborah Huntley, PhD, and Erin Baxter, PhD. 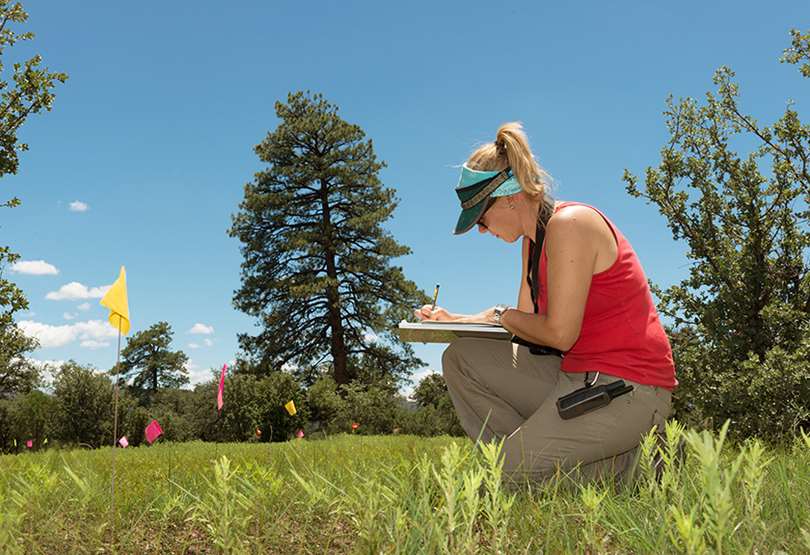 Between 2015 and 2017, RAAP conducted survey work in the greater Reserve, New Mexico, region. The survey is part of our long-term research project focusing on regional changes in population density and settlement organization related to paleoclimatic changes, natural resource distributions, and broader social developments during the Pithouse through Pueblo periods (ca. 200–1350 CE).

Located between the well-known Mimbres region to the south and the Chaco and Cibola regions to the north, the Mogollon Highlands are often viewed as a transitional zone, frontier, boundary land, or even a backwater. These varied interpretations are mostly due to the lack of research and, consequently, a general lack of awareness of the nature and density of the settlement in the region. Our research, along with the limited amount of other work in the region, demonstrates that the Reserve area maintained an expansive and intensive population during the early part of the Pueblo period (1000–1250 CE). Masonry pueblos with 40 to 100 rooms line the margins of the perennial Tularosa and San Francisco rivers.  Deeper into the mountainous terrain, there are smaller pueblos of two to 10 rooms dotting the landscape. Many of these smaller settlements were likely supported by the abundance of natural springs in the area that now sustain ranching and cattle grazing.

Thus far, we have examined several survey tracts in a range of environmental settings—from pinyon and juniper scrublands to ponderosa pine forests. We have covered over 3,000 acres and documented 44 archaeological sites—including several previously (and often poorly) recorded sites. Although we have recorded pithouse sites, the majority of the sites we identified are masonry pueblos associated with black-on-white pottery from the Reserve (1000–1100 CE) and Tularosa (1100–1250 CE) phases. We have also noted a handful of previously unrecorded rectangular great kivas, which led to our excavation of the Torriette Lakes Great Kiva and the quest to understand the community that used this space. 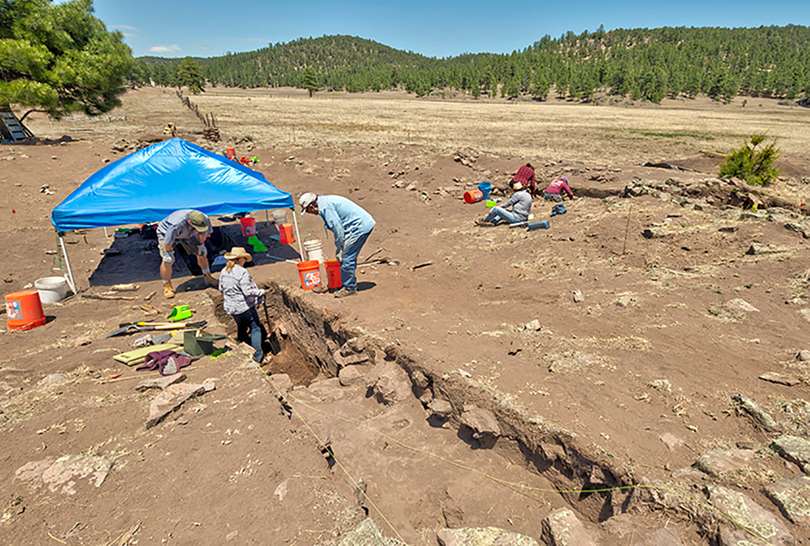 In 2018 and 2019, RAAP turned its attention to the Torriette Lakes Great Kiva. Located at an elevation of 7,300 feet, this is the highest-elevation great kiva in the American Southwest. The site sits adjacent to a Forest Service road, and cattle grazing has recently disturbed the structure. When we first identified this threatened site in 2016, it appeared to be a shallow, isolated, square great kiva of unknown date. Survey, excavation, and remote sensing have refined this interpretation. Thanks in part to this work and collaboration with a team of Zuni cultural advisors, we now hypothesize that the roof for this very large kiva was supported by a series of five huge posts, was built atop earlier structures, and was likely occupied as early as the 12th century. We are continuing to analyze artifacts from the site but have identified three ceramic sherds of Starkweather black-on-white pottery—some of the rarest in the Southwest—and turquoise, crystal, and obsidian that appeared to be offerings placed inside of the postholes before construction.

Within a two-mile radius of the site, there are 76 pueblos consisting of over 150 rooms. Remote sensing around the kiva did not identify any immediate nearby structures. This is interesting when compared to other great kivas in the region, most of which have associated pueblos. However, remote sensing did locate ancient waterways and possible agricultural terraces that could have been used to support the surrounding community in tenuous, high-altitude farming. If 2019 was any indication (it snowed in May), the builders of the Torriette Lakes Great Kiva were tenacious agriculturalists, excellent masons, and extraordinary artisans, and we still have much to learn from their work and lives. 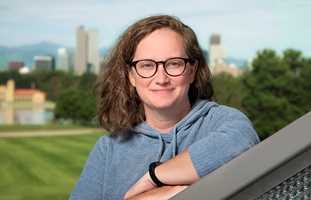