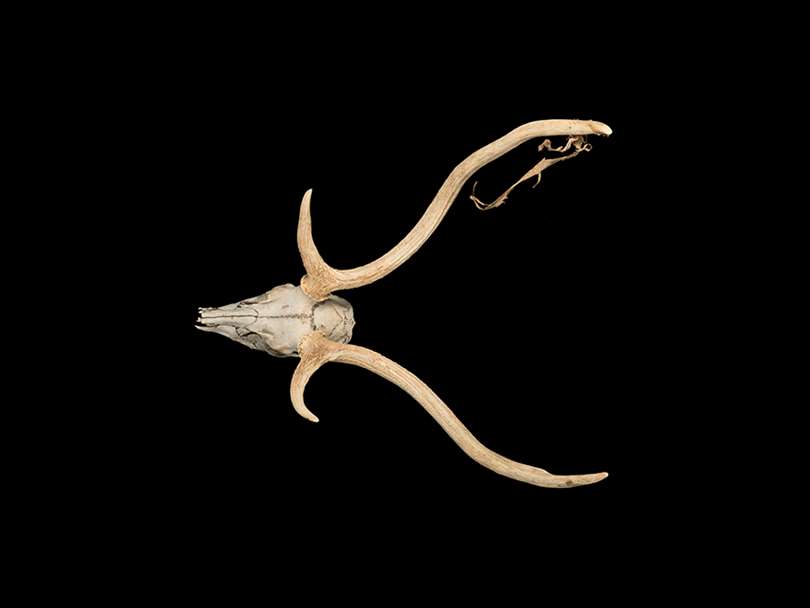 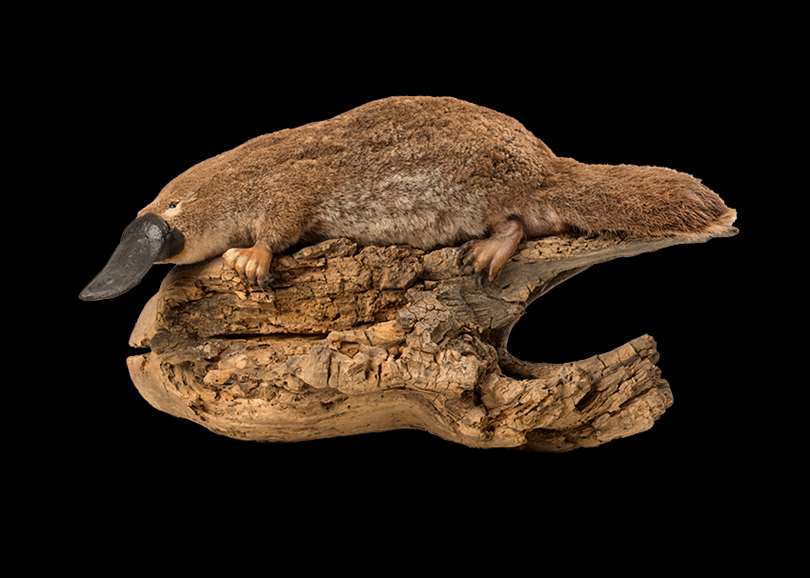 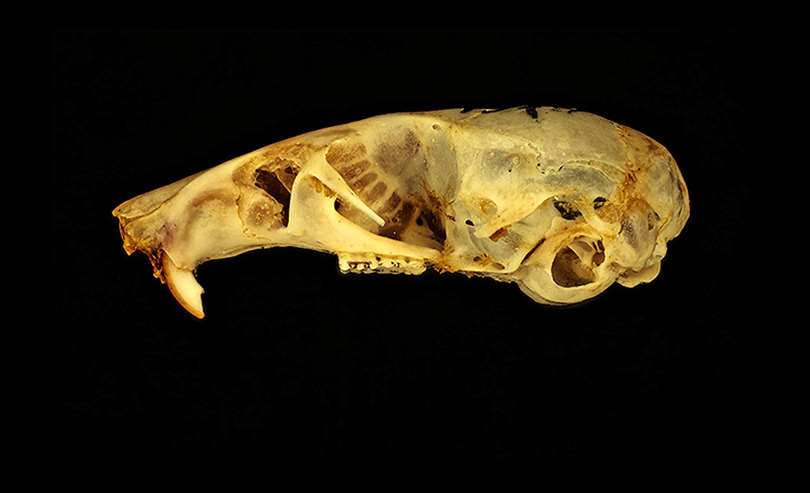 Collected in Baca County, Colorado in 1914 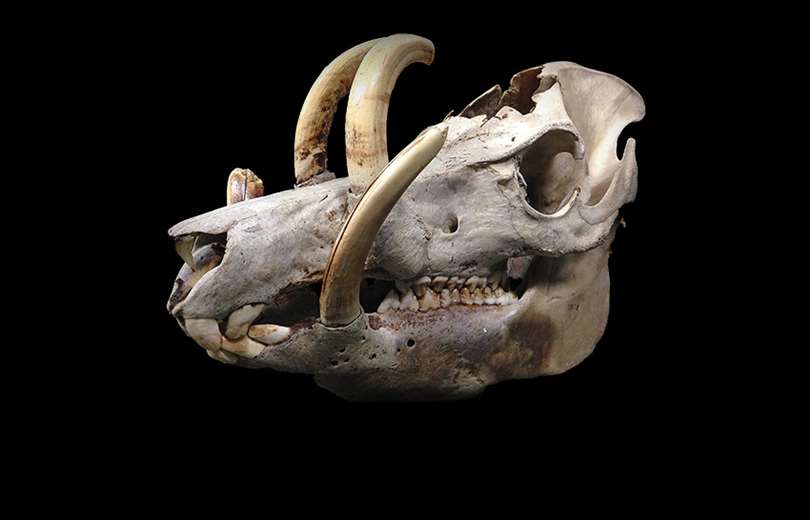 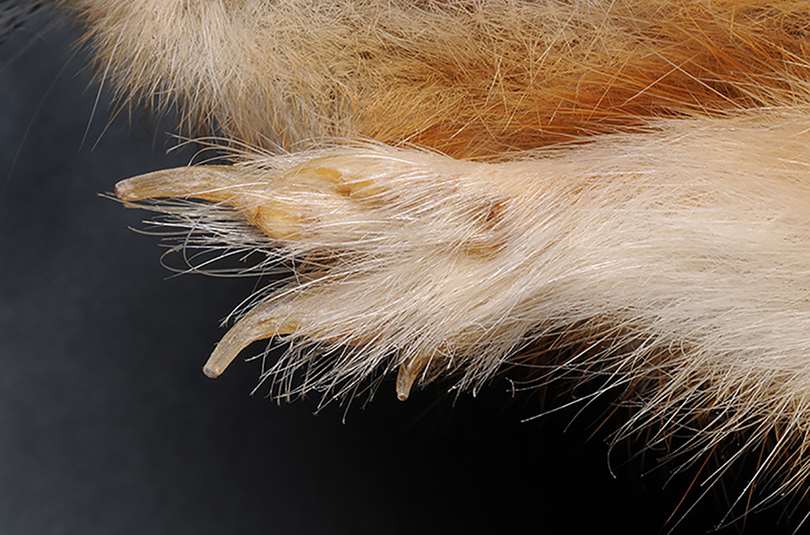 Collected in the Bering Strait in 1922 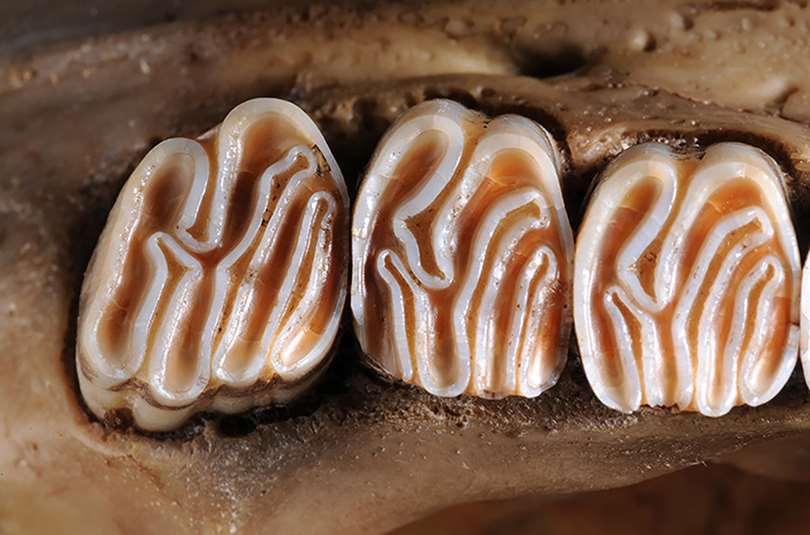 molars of an American beaver 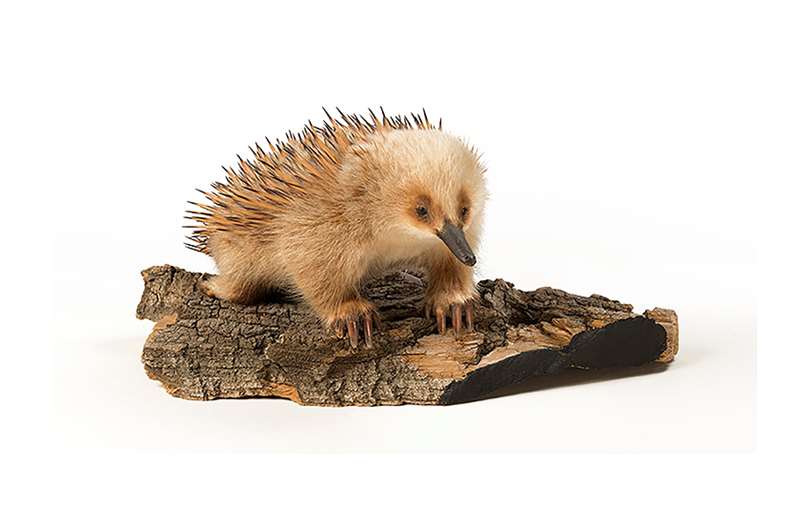 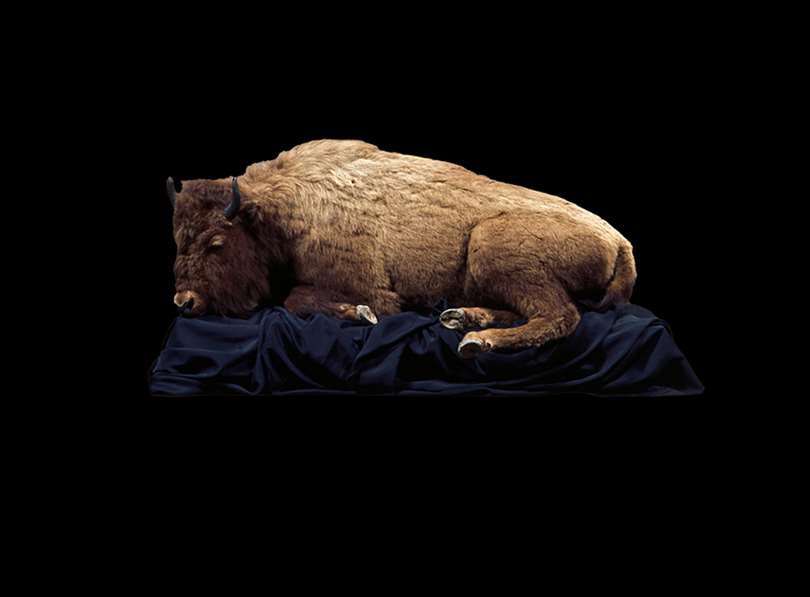 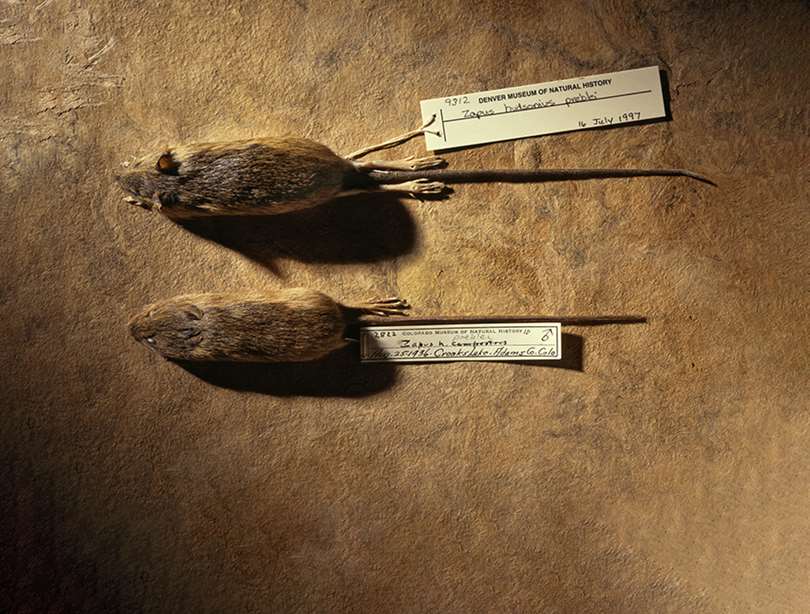 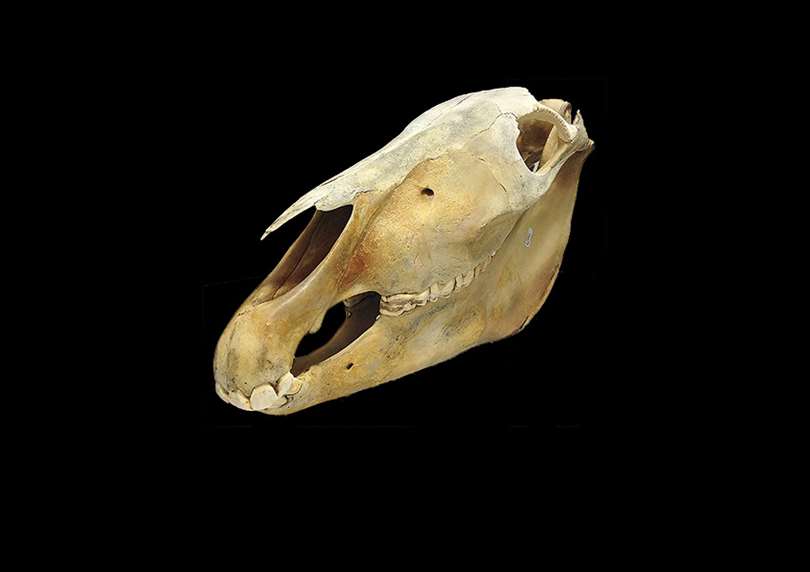 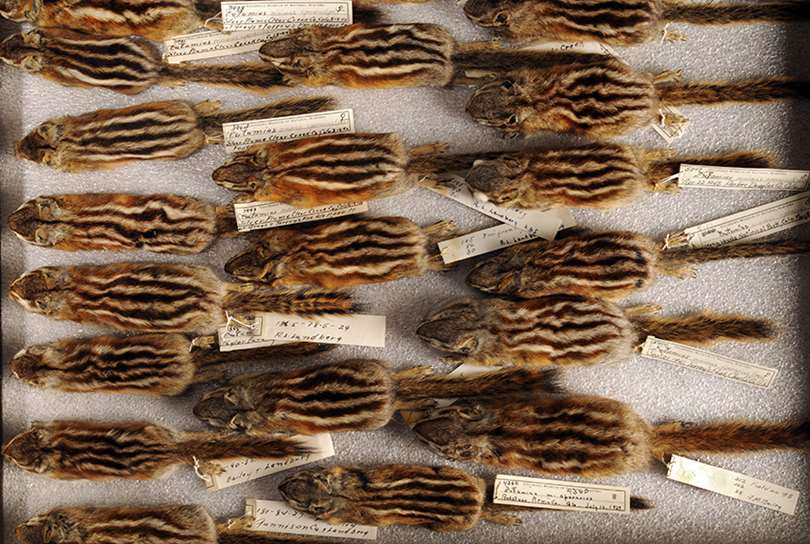 The mammal collection currently consists of approximately 21,000 specimens, which includes 19,000+ cataloged specimens. The collection spans 1870 to the present, is worldwide in coverage, and includes specimens from the three major extant mammalian lineages (monotremes, marsupials, and placentals) distributed across 21 orders, 266 genera, and 381 species. Specimen records are databased in Arctos and also accessible through GBIF, iDigBio, VertNet, Map of Life, BISON, GGBN, and GenBank. The collection’s primary strength is its focus on the southern Rocky Mountains and Great Plains. Approximately 82% of the collection is from the western United States, with specimens from Colorado (73%) representing the largest percentage. Small mammals, such as shrews, rodents, lagomorphs, and bats, constitute the majority (84%) of specimens in the collection. The composition of the collection is primarily study skins and skeletal material, with a growing wet collection. High-quality specimen data, frozen tissues, and parasites are associated with most of the specimens archived since 2006. Use of the collection through loans and citations (Google Scholar) continues to grow.

The collection includes nine holotypes (one species, eight subspecies) and 20 paratypes all described by Museum staff between 1915 and 1933 (summarized in Jones 1994). Many of these have since been synonymized with other taxa. Type specimens for nine (seven from Colorado) holotypes include: the hog-nosed skunks (Conepatus mesoleucus figginsi and C. m. fremonti), badger (Taxidea taxus phippsi), white-tailed deer (Odocoileus virginianus mcilhennyi), caribou (Rangifer mcguirei), bison (Bison bison haningtoni), yellow-bellied marmot (Marmota flaviventris campioni), northern pocket gopher (Thomomys talpoides macrotis), and wood rat (Neotoma albigula laplataensis). These specimens are of historic significance in that they are an important record of some of the earliest mammalian studies conducted in Colorado.

The mammal collection’s history as part of the Museum’s greater history is documented in Denver's Natural History Museum: A History (Johnson et al., 2013). The growth of the mammal collection can also be traced back to the incorporation of the Colorado Museum of Natural History (CMNH) in 1900 with the acquisition of Edwin Carter’s bird and mammal specimens. Mammal collection activity tracks different institutional foci and staffing over the last 119 years. The first period of real growth begins 1900–1910 and reflects collecting efforts in Colorado and New Mexico to document species occurrence and acquire specimens for public display in exhibits and dioramas. In 1910, mammalogist and ornithologist Jesse Figgins was hired as Museum director and initiated a period of growth centered on building the research collections and public exhibits. Expeditions in the North America (Rocky Mountain region; Alaska 1921) and abroad (South America 1926, 1928) supported this growth.

Following Figgins, Alfred Bailey was hired as director in 1936; he remained until his retirement in 1969. Once again, collecting in the Rocky Mountain region continued in earnest, coupled with international expeditions to Central America (1931), Australia (1949), Campbell Island (1958), Galapagos Islands (1960), and Botswana (1969). As during the Figgins era, the fruits of these expeditions are still on display in the Museum’s diorama halls. During this time, Bailey also hired two mammal curators: Albert Rogers (1948–1958) and Henry Wichers (1959– 1972).

From 1980 to 2003, a major spike in growth occurred under the direction of Carron Meaney (1985–1991, curator of mammals) and Cheri Jones (1992–2003, curator of mammals) with focused collecting trips in Colorado and Wyoming. During this period, many improvements were made to collection storage conditions and protocols; these improvements had a positive impact on the mammal collection. This included improvement of collections care by increased environmental monitoring and implementation of an integrated pest management (IPM) program in 1988 followed by accreditation by the American Society of Mammalogists in 1989. In 1999–2001, funding from IMLS (IC-90-194-99) was used to improve storage conditions (cabinets, compactors, and specialized storage mounts) for 600 large-bodied mammals stored in a 5,000-ft2 shared collections area of the Museum.

In August 2006, John Demboski was hired as the curator of vertebrate zoology; he is responsible for both the mammal and bird collections. Demboski began an aggressive program of growing both collections through mammal collecting (in part funded by NSF DEB-0716200) and salvage (including birds). This burst of activity has resulted in the greatest amount of growth (120%) in the mammal collection’s history (2006–2019) when compared to the previous 119 years. This recent growth has also benefited from salvaged or collected mammals obtained from Colorado Parks and Wildlife, United States Fish and Wildlife Service, Mesa Verde National Park, Denver Zoo, Colorado Natural Heritage Program, and wildlife rehabilitation centers among other agencies and groups.

Demboski also instituted rigorous curatorial procedures; development of a mammal collection manual; more discriminatory accession policies (e.g., only specimens with provenance); and processing of a large backlog of accessioned specimens from the 1990s. In 2010, mammal specimen records were migrated to Arctos, and paper cataloging ceased. In spring 2011, a National Science Foundation grant ($500,000) was awarded to Demboski to support the purchase of new cabinetry (120 Delta Design cabinets with trays), inventory, reorganization, and databasing of the mammal collection in preparation for the 2014 move into the new facility. This funding also allowed a full-time collections technician, Meghan Truckey (now the Museum’s registrar), to be hired for a three-year term through 2014. In 2014, the collection was moved to the new Avenir Collections Center, and since then there have been ongoing projects around organizing the collection to make the best use of space in the new facility.

The ongoing growth of the mammal collection by Demboski has been spurred on by the need to better document mammalian diversity (including genetic diversity) in the southern Rocky Mountain region. This is important given the rapid influx of people into the region, particularly Colorado’s Front Range, over the last 20 years coupled with a growing concern for the effects of rapid climate change. Given its 150-year span, the mammal collection provides an important, baseline resource from which to compare and contrast findings based on contemporary sampling of the mammalian fauna.

As one of the largest natural history museums between Chicago and the West Coast, the Denver Museum of Nature & Science has a long history of connecting with the general public through informal science education. There are a lot of opportunities to both learn about and view artifacts and specimens and, in many instances, actually tour collections. A highly visible aspect of the mammal collection is its presence in the extensive wildlife dioramas (104 dioramas and 10 gallery halls on three floors) with accompanying interpretation. The mammal specimens, primarily body mounts, on long-term public display are curated by curator Demboski and cataloged in the Museum’s mammal collection. The wildlife dioramas are a very popular and effective way of engaging the public across a wide range of topics covering evolution, ecology, wildlife issues, and human impacts on the environment. In addition, specimens from the mammal collections are routinely used to enhance temporary exhibits, touch carts, and special programs on the Museum floor.

The number of members of the public—11,000+ visitors since 2006—who have enjoyed the mammal collection via guided behind-the-scenes tours, education programs, open houses, special programming events (e.g., Museum summer camps, Science on the Spot, Museum member nights, etc.), lectures, workshops, and K-12 and university-level classes is truly amazing. The Museum is committed to allowing access to collections by as wide and varied an audience as possible. We view our role as a public repository for Earth’s biodiversity as an important function of natural history museums in general and the Denver Museum of Nature & Science in particular. Another significant outreach and educational outlet that leverages the research collections is the Museum’s extensive volunteer corps (1,900+); zoology volunteers (~121/yr) have donated 140,300 hours since 2006, including preparing specimens, working in the dermesterium, databasing, handling specimen inventory, verifying data, and many other general collection tasks. Many of these volunteers work in the mammal collection. The collection provides an irreplaceable geographic and temporal record of biodiversity in the region and abroad, and this is evidenced by both the professional and public use of the material, consistently producing among the highest use metrics of any of the Museum’s research collections. 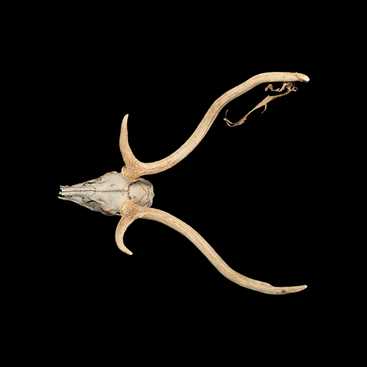 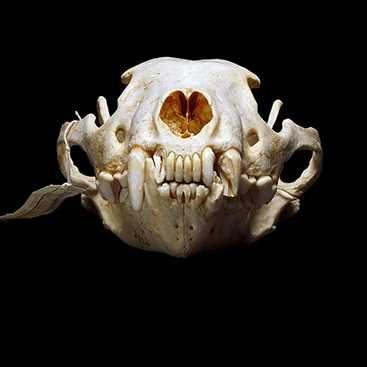 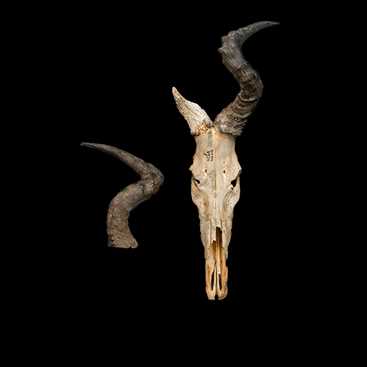 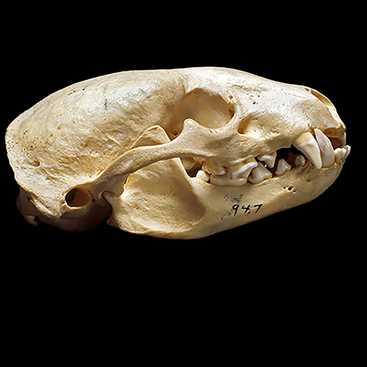