All guests are required to have a timed ticket for entry into the Museum. A Separate timed ticket is also required for temporary exhibitions.

Explore where, when, why, and perhaps most intriguing, how Stonehenge was built in "Stonehenge".

After centuries of speculation, we are finally forming an understanding of Stonehenge thanks to archaeological excavations and advances in scientific techniques. Evidence from Stonehenge itself, along with remains from its surrounding landscape shed light on the people who constructed one of the most world’s most famous monuments.

The people who built the first Stonehenge 4,500–5,000 years ago were among Britain’s earliest farmers, living in the sacred Salisbury Plain. The Stonehenge that stands today was built an estimated 500 years later around 2500 BCE. While there are many known henges—or monuments—what makes this second iteration of Stonehenge unique is that most of its stones were brought from Wales, which lies 150 miles to the west.

Explore Stonehenge’s story – one of change and evolution – through hundreds of artifacts and modern science. Immerse yourself in the science and the spirit of place that is Stonehenge!

This exhibition is produced by MuseumsPartner in Austria in collaboration with English Heritage. 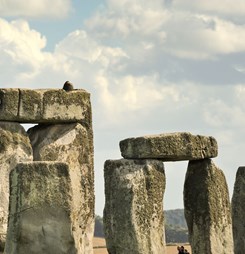 Try your hand at Stonehenge trivia and activities made for the exhibition, Museum or home. 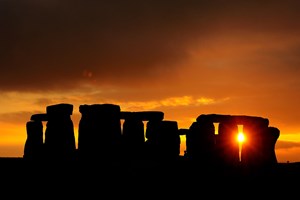 Welcome the summer with a solstice celebration! Erin Baxter, curator of anthropology, will host an evening spotlighting past and present solstice revelry. First, Erica Ellingson from the Department of Astrophysical and Planetary Sciences at the University of Colorado Boulder will take you on tour of the ancient skies of Stonehenge and discuss the astronomical events venerated by its builders. Then, Deborah Whitehead, associate professor of religious studies at the University of Colorado Boulder, explores how modern-day religious groups like druids and neopagans interpret and interact with the ancient site of Stonehenge.

Buy Now
Back To Top