The Science Behind Pixar

Teachers, bring your students to this fun and educational experience! Book now.

Everybody has a favorite Pixar film, but what it takes to make one is a mystery to most fans. Now the ingenuity behind the magic comes to light in the new exhibition The Science Behind Pixar, opening at the Denver Museum of Nature & Science on Friday, October 11. This immersive experience explores the science, technology, engineering, art, and math concepts used at Pixar Animation Studios every day to bring their beloved films and characters to life.

Movie theater audiences witnessed a filmmaking revolution in late 1995 when Pixar released Toy Story. The movie was the first of its kind—a feature-length computer-animated production—and critics and the general public alike were enthralled to see something so fresh and groundbreaking on the big screen. Nearly 24 years and 21 box office hits later, Pixar continues to impress and delight.

Each section in The Science Behind Pixar focuses on a step in the filmmaking process—modeling, rigging, surfaces, sets and cameras, animation, simulation, lighting, and rendering—delivering an unparalleled view of the production pipeline used by the Pixar artists and computer scientists. Guests will enjoy more than 50 interactive elements, hear first-hand from the studio’s production teams in video profiles, and come face-to-face with re-creations of popular characters, including Buzz Lightyear, Dory, Mike and Sulley, Edna Mode, and WALL•E.

These are just some of the activities included in the experience:

“We are excited about bringing this unique experience from Pixar Animation Studios to the Colorado community,” said George Sparks, President and CEO of the Museum. “Pixar films are one of the most inspiring examples of how science, technology, engineering, art, and math can intersect with creativity and imagination to bring joy and awe to people of all ages.” 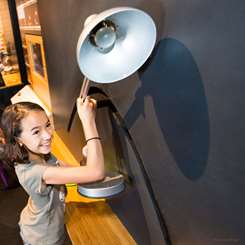 WHEN: October 11, 2019–April 5, 2020
WHERE: Denver Museum of Nature & Science, 2001 Colorado Blvd., Denver, dmns.org
HOURS: Open 9 a.m.–5 p.m., daily, with extended hours at various times. Closed December 25.
TICKETS: Timed tickets required and advance reservations encouraged. Tickets available at 303.370.6000 or dmns.org/pixar. Guests pay $28.95 adult, $24.95 senior (age 65+), $22.95 junior (ages 3–18). Save $1 by booking online. Students receive 10 percent off adult admission with their ID. All tickets include general admission. Museum members receive discounted admission. If you need to reschedule your tickets, please call Guest Services at 303.370.6000 at least 24 hours in advance of your scheduled time. A $5 per request rescheduling fee will be added to your order when you reschedule The Science Behind Pixar tickets.
GROUP SALES: Discounted tickets are available with advance reservations for groups of 10 or more. Contact 303.370.6000 or [email protected]
PARKING: Parking is free and can be challenging during popular times. Alternative transportation is encouraged. Bike racks are available, and Lyft offers $5 off three rides for new users with the code DMNSNEW.
ORGANIZERS: This exhibition was developed by the Museum of Science, Boston in collaboration with Pixar Animation Studios. © Disney/Pixar. All rights reserved. Used under authorization. The Science Behind Pixar exhibition is an immersive experience that explores how Pixar Animation Studios brings their beloved films and characters to life.

MODELING: Digital sculpting creates virtual 3D models
Character design starts with artists who create sketches and clay sculptures called maquettes to get each character just right. A digital modeler then creates a virtual 3D model of the character, sometimes digitally scanning the maquette. The final model is a virtual digital wireframe of points and the edges that connect them.

RIGGING: Digital rigs make movement possible
Riggers create rigs, or the virtual bones, joints, and muscles for models. Rigs specify the relationships between body parts so that bending a knee will raise the foot, but not move the hands. A good rig allows the animators to create poses easily and efficiently. Without the right controls, the model won’t move the way it should. Too much flexibility makes posing the model too time consuming.

SURFACES: Appearance is controlled separately from shape
The way something looks tells a story. What is it made of? Is it new or old? Well cared for or neglected? After a virtual 3D model is created, a surfacing artist constructs its appearance with computer programs called shaders. They determine the way light scatters off the surface so it looks shiny, transparent, and smooth (like glass) or dull and rough (like rust).

SETS & CAMERAS: Virtual cameras view virtual 3D worlds
Movies need more than just characters. The setting of each scene and the way each image is framed convey the context, story, and emotion. Set designers are architects. They build virtual environments from the ground up. Every pebble, tree, and building helps turn the storyboards into a believable world. Camera artists use virtual cameras to shape what is shown on screen. They choose the composition, camera movement, and lens type to support the story.

ANIMATION: Animation is acting
Pixar animators bring a story to life, posing characters to act out each scene. Animators start by creating key frames that mark out important positions in a movement. They then use a computer program to describe how the object moves between the key frames so the resulting animation conveys the desired emotions.

SIMULATION: Computer programs create automated motion
While animators focus on acting, simulation programmers create motion that makes scenes feel alive and believable. Some simulations––hair, fur, and clothing––respond to the way a character moves. Other simulations re-create natural phenomena, such as fire or water. Programmers start with the underlying physics, but they balance believability with the artistic needs and the time it takes to run the simulation.

LIGHTING: Virtual lights enhance mood and believability
Lighting is an essential part of telling a story. Light shows you where to look and enhances the emotional feel of each scene. Pixar’s lighting designers have the additional task of defining virtual lights in the computer. The color, position, and intensity of each light needs to be programmed to achieve the desired artistic effect.

RENDERING: Rendering turns a virtual 3D scene into a 2D image
The virtual scene is set—the characters are shaded and posed, the lights and camera are in position, and the simulations are ready to run. But no one knows what it looks like until the rendering process turns all that data and programming into an image we can see. Pixar generates low-resolution renders for work in progress and high-resolution renders for the final film. The Science Behind Pixar exhibition is organized into sections focused on steps in Pixar’s technical process and showing how an idea results in a finished product: Modeling, Rigging, Surfaces, Sets and Cameras, Animation, Simulation, Lighting, and Rendering.

RIGGING (creating virtual joints and muscles so the models can move)

ANIMATION (bringing the story to life and posing characters for scenes)

LIGHTING (lighting each scene and enhancing the emotional impact)