IMAX® Theatre in Phipps Auditorium takes you from the comfort of their seats right into the middle of the action as they explore the newest frontiers in science and some of nature’s wildest places on a 3-story high screen. 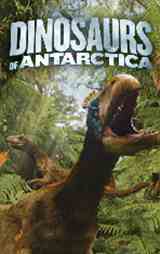 Dinosaurs of Antarctica will introduce audiences to the amazing and bizarre prehistoric creatures that inhabited Antarctic forests and swamps hundreds of millions of years ago. The film follows a team of paleoecologists on a quest to understand the southern continent’s profound transformation, from a warm and bio-diverse Mesozoic to the frozen desert we know today.

7 Reasons to Watch Dinosaurs of Antarctica

NOT ALWAYS ICY
Did you know Antarctica was not always covered in ice and was once home to bizarre early dinosaurs and their relatives? Learn about dinosaurs you may have never heard of, like Cryolophosaurus and Glacialisaurus.

CRAZY MONTHS OF DARKNESS
Discover ancient climates and learn how ancient animals managed to survive in extremes on the southern pole! Even though it was ice-free, the plants and animals of ancient Antarctica still had to contend with crazy day and night cycles throughout the year, with three months of nearly complete darkness and three months of nearly complete daylight.

FAN-LIKE CRESTS
The meat-eating Cryolophosaurus had a strange, fan-like crest on its forehead. We think these may have been displays to attract mates or signal to their friends, much like the bizarre crests on birds today. In this film, you will get to see how a Cryolophosaurus may have used its crest to attract attention!

AMPHIBIANS RULED!
Learn about the predators that lurked in the freshwater streams and rivers of Antarctica. The climate was too extreme to support more familiar aquatic predators like crocodiles, so giant amphibians took their place.

MOUNTAINS IN ANTARCTICA
Antarctica is not entirely covered in ice as most people would think. There are actually mountains crossing the interior of the continent, which expose rocks from the early time of dinosaurs, and the coasts preserve some of the last Cretaceous dinosaur ecosystems from the edge of the world. You’ll get to see these in the film.

ANTARCTICA & PANGAEA
Fossils collected from some of the earliest Antarctica expeditions were some of the first used to demonstrate that the continents were once linked into a vast supercontinent, Pangaea. Colorado was much farther south than it is today, near the western coast of Pangaea.

NOT MUCH MOVEMENT
Antarctica has not moved much over the past 250 million years. The southern continent has been on the bottom of the globe ever since it was part of Pangaea. This is still being studied by geologists. Antarctica currently has about 5.483 million square miles and a seasonal human population of 1,000 to 5,000.

Wings Over Water, narrated by Michael Keaton, tells the compelling story of three amazing bird species—the Sandhill Crane, the Yellow Warbler and the Mallard Duck—with extraordinary footage of their fascinating behaviors. All of them depend on the wetlands for their survival. Audiences will be captivated by the triumphs and challenges of these remarkable birds that defy all odds as they head home to the prairies to raise their young.

5 Reasons to Watch Wings Over Water

HOLY AVIAN INVASION!
Using radar data, scientists estimate that approximately 2.1 billion birds cross the Gulf of Mexico from the Yucatan to the U.S. Gulf coast every March through May. The birds are moving from their wintering grounds in Central and South America to their breeding grounds in North America.

THE AVIAN INVASION COMES IN ALL SIZES
The mass of spring migrants is mostly made up of songbirds. You may know these birds by their familiar names, like sparrows, orioles, grosbeaks and warblers. They range in size from 40 grams to less than 10 grams. However, the smallest crosser is the 3-gram Ruby-throated Hummingbird!

TALK ABOUT CARDIO
The nearly 600-mile journey takes most birds between 11 and 18 hours, and they make the journey at night. For comparison, an ultra-marathon usually takes a human athlete between 14-15 hours to complete a 100-mile race. These birds are moving fast!

“HOW FAST,” YOU ASK? FULL THROTTLE!
The birds fly pretty high, which gives them the ability to take advantage of tailwinds. These winds can boost their flying speed to up to 40 knots or just over 46 miles per hour!

FAT AS FUEL
The migrant birds load up on fat before departing for the 600-mile sprint. For example, the average Yellow Warbler weighs 11 grams but will pack an extra two grams of fat before flying North. That’s like a 100-pound person putting on 18 pounds of fat over the course of a week! A Yellow Warbler burns about 0.11 grams of fat per hour while crossing the gulf, so if migration takes 18 hours it will have burned off 1.98 grams— nearly all of the fat it put on before leaving. Imagine losing 18 pounds in 18 hours!

Reserve Tickets
Back To Top