an American B-17 Bomber crashed in a farmer’s field in Northern France. As the plane spiraled out of formation, all the crewmen escaped except for the pilot who remains unaccounted for amongst the wreckage. Seventy-eight years later, there are few clues on the surface as to how things played out on that fateful day. 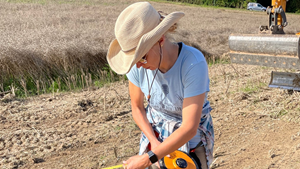 In the years following the crash, townspeople removed parts of the plane to use as scrap metal and to rid the field of debris. There are some conflicting accounts that the pilot was found and buried elsewhere, but nothing has been confirmed. Thus, in August 2021, archaeologists, including Erin Baxter, Amy Gillaspie and myself (pictured here), from the Denver Museum of Nature & Science partnered with Colorado State University’s Center for the Environmental Management for Military Lands to embark on a mission to find the pilot through the Department of Defense POW/MIA Accounting Agency.

The crew consisted of CSU students, veterans and volunteers from the U.S. and American Legion Paris Post 1. Since none of us had ever been to the site before we had a lot to figure out before we could start digging. Once we arrived, a team of Denver-based amateur metal detectorists helped define the extent of the crash, which we learned was over one kilometer across the field. We also used metal detectors to find the area with the most concentration of wreckage, hoping this would lead us to the cockpit.

Nord-Pas-de-Calais, France. The Center for the Environmental Management of Military Lands designed this mission around a partnership model that incorporated team members from multiple institutions in the United States, multiple organizations in Europe, and once on the ground expanded the partnership to include members of the local community. Parents and grandparents from the local community have brought their children and grandchildren to site allow them to gain a firsthand appreciation of the sacrifices that US Army Air Corps aviators made to free France from Nazi tyranny during the Second World War. Pictured are European volunteers and local resident volunteers continuing the long-partnership between the United States and France. 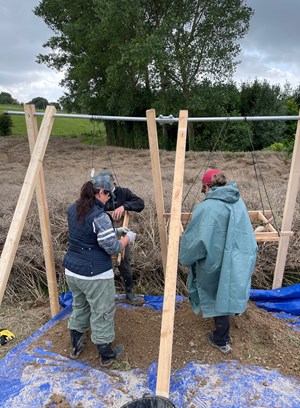 Eye-witness accounts from the surviving crewmen suggested that the pilot was in the cockpit when the plane went down. Therefore, focusing our excavation efforts there was the goal. In the four weeks we were on site, we excavated nearly 120 square meters and screened the dirt from these units. We found many parts of the plane in this process, including pieces of the cockpit. I think we are in the right place if the pilot is to be found. A crew will need to return to the site next year to hopefully finish the work.

This project was unlike anything I have ever worked on in the past. It is rare to have a singular goal in archaeology that outweighs everything else that you find. Usually, archaeologists are constantly shifting the approach based off what is found, and while that was the case for this project, the only way to be successful was to find the pilot. It is also very different as an archaeologist to know the name and story of the person you are looking for.

In the four weeks we were on site, we excavated nearly 120 square meters and screened the dirt from these units

Although I am not able to disclose this information, it truly changed how I approached the work and gave me a new appreciation for what my grandparents and an entire generation went through not all that long ago. It was a real honor for me personally, and for the Museum as an institution, to be a part of this mission. I hope that our efforts are able to see this project to completion and we are ultimately able to bring him home.