George Sparks has been the president & CEO of the Denver Museum of Nature & Science since November 2004. He spent 24 years in the electronics measurement business at Hewlett-Packard and Agilent Technologies. His career included marketing, sales, and general management of global businesses in software, systems, and services.

Prior to joining Hewlett-Packard, Sparks spent nine years in the Air Force as a pilot and as an assistant professor of aeronautics at the United States Air Force Academy (1976-1978). He is a distinguished graduate of the USAF Academy with a bachelor’s in aeronautical engineering, and holds a master’s in aeronautics and astronautics from Massachusetts Institute of Technology.

Sparks’ passion is public policy, particularly around science and education. He is a member of the Colorado Forum, Colorado Concern, and is on the boards of Colorado Education Initiative, Colorado Music Hall of Fame, Denver Metro Chamber of Commerce, and the Denver School of Science & Technology.

George is the founder of the Institute for Science & Policy, a program of the Museum.

He loves his wife and all of his children.

Ed Scholz is vice president of finance & business operations and is responsible for all traditional administrative functions as well as guest, volunteer, and retail food operations. He previously served for over a decade in various financial roles for the City and County of Denver, including as the budget director, deputy CFO, and CFO. As budget director, he oversaw a $2 billion citywide budget focused on long-term fiscal and capital improvement planning and performance management.

Scholz’s studies of music and finance led him to master’s in nonprofit management from Binghamton University in New York and a career that began in development for public broadcasting. He has taught local and national courses on performance management and is a graduate of the Harvard Kennedy School’s Senior Executives in State and Local Government program. He is currently on the board of the Public Education & Business Coalition and is a member of the Audit Committee for the City and County of Denver. Scholz has also served on the board of the Center on Colfax and several task forces in the metro-area, including the City of Denver Structural Financial Task Force, the Arvada Center Governance Task Force, and the National Western Center Task Force.

Vice President of Experiences and Partnerships

Nancy Walsh is the vice president of experiences & partnerships at the Denver Museum of Nature & Science. She works with a talented team and our community to create the vision, creative direction, and operation of a diverse array of innovative and engaging exhibitions and programs for all ages—onsite, offsite, and virtually. Walsh also works to nurture local and national partnerships that advance the Museum’s strategic plan.

Walsh joined the Museum in 2006 as lead educator on the development team for the “Expedition Health” exhibition. She was a driving force behind the successful opening and reprogramming of the Museum’s most recent expansion, the Morgridge Family Exploration Center. Walsh is the vice president lead for the Museum’s No Walls Initiative, which has increased both the number and the diversity of people who connect with the Museum around nature and science in ways that are meaningful to them and in places that matter to them. Before her appointment as vice president in 2016, Walsh served as director of museum partnerships and programs.

Walsh is passionate about the vibrancy of local communities and inclusive access to science, technology, engineering, arts, and math. She has been the principal investigator on multiple grants that support innovative programming in this area. She was a mayoral appointee on the Denver Commission on Cultural Affairs and as co-chair worked on the city’s cultural plan, Imagine 2020. She currently serves on the boards of the Denver Public Schools Scholarship Foundation, the Colorado Business Committee for the Arts, the Art Students League of Denver, and CherryArts. Walsh is an alumnus of Leadership Denver. She holds a master’s degree in evolutionary biology from the University of Chicago and is a Phi Beta Kappa graduate of Earlham College, where she received a bachelor’s in biology. 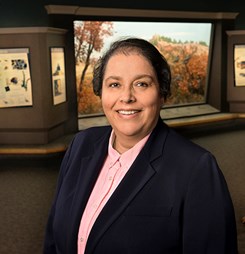 Vice President of Research and Collections

Chavarria brings more than 20 years of experience in managing teams of gifted professionals and innovative science programs, influencing policy, developing new scientific collections, and leading scientists in research efforts both nationally and internationally. She is a recognized visionary leader in the scientific world. Prior to joining the Museum, she was senior science advisor and forensic science branch chief at the U.S. Fish and Wildlife National Forensics Laboratory in Ashland, Ore.

Growing up in Mexico City, Chavarria developed a passion for nature and science at an early age, especially for bees. She has devoted her career to the conservation of native pollinators, especially bumble bees. Her recent work as a wood anatomist focused on fighting the illegal trafficking of tropical hardwoods.

She received her bachelor’s degree in biology from the National University of Mexico, and her master’s and doctorate degrees in organismic and evolutionary biology from Harvard University, where she studied under Edward O. Wilson, the researcher, naturalist, entomologist, and two-time Pulitzer Prize winner. She has conducted research in more than 30 countries.

Chavarria serves on a number of boards and advisory councils, including the American Institute of Biological Sciences, the National Parks Conservation Association, Defenders of Wildlife, and the Doris Duke Conservation Scholars at the University of California, Santa Cruz, and has a special commitment to mentoring the next generation of scientists.