Learn more about the profession of art conservation: American Institute for Conservation (AIC) Conservation as a profession strives to preserve scientific and cultural heritage for the future. Behind-the-scenes in the Avenir Conservation Center, conservators work to stabilize the collection. One of the ways they do this is through conservation treatment. A conservation treatment stabilizes any deterioration that may be occurring to an object or specimen as it ages. Deterioration can be physical (breaks or tears), chemical (corrosion), or biological (insects). The steps of a treatment always begin with a condition examination, followed by a treatment proposal that outlines the actions to be taken by the conservators to address the deterioration. These actions can include repairing breaks in baskets with special tinted papers and rice starch paste, removing active and destructive corrosion from copper-alloy metals, or bridging gaps in porcupine quill decoration caused by insects. Once unstable objects are repaired, they can safely be placed on exhibition, travel to another institution for a loan, and be available to native descendants or others for research.

Conservators in the Center have studied chemistry, art, and anthropology to become experts in identifying materials and understanding what products might best be used to stabilize any deterioration. For example, a strong adhesive is required to repair ceramics and glass, but that same adhesive will be too strong for delicate baskets and leathers. Another type of adhesive must be tested and chosen.

All steps of the conservation treatment are documented. As well as written reports detailing the methods and location of the treatment, documentation can include digital, infrared, or ultraviolet photography. The conservators utilize specialized equipment, such as stereo and scanning electron microscopes, to identify grasses and fibers. Commercial pH-indicator strips are used to test the acidity of deposits on glass beads to determine if destructive “bead disease” is present.

This grant focuses on several hundred items from the culture groups: Makah, Nuu-chah-nulth, Kwakwa̱ka̱ʼwakw, Haida, and Tlingit. The goal of the condition survey is to advance stewardship and public access for items in the Northwest Coast Collection through a collaborative process with the communities. This collaboration with community members is key to better understanding the collection items, promoting access, and planning for long-term care of these items in culturally appropriate ways.

Items that are part of the project include: baskets, tools, weapons, masks, headdresses, figurines, and more. 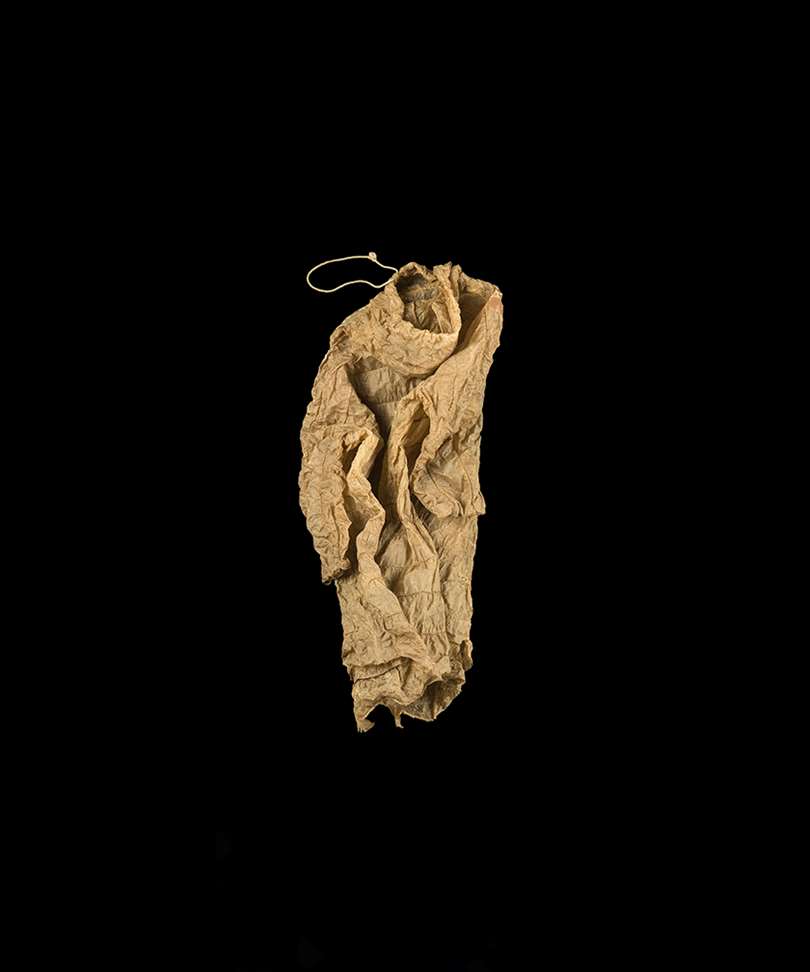 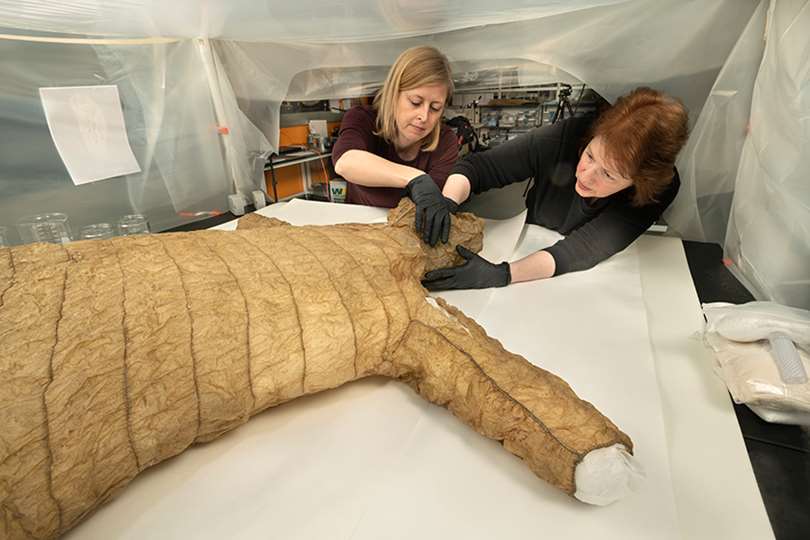 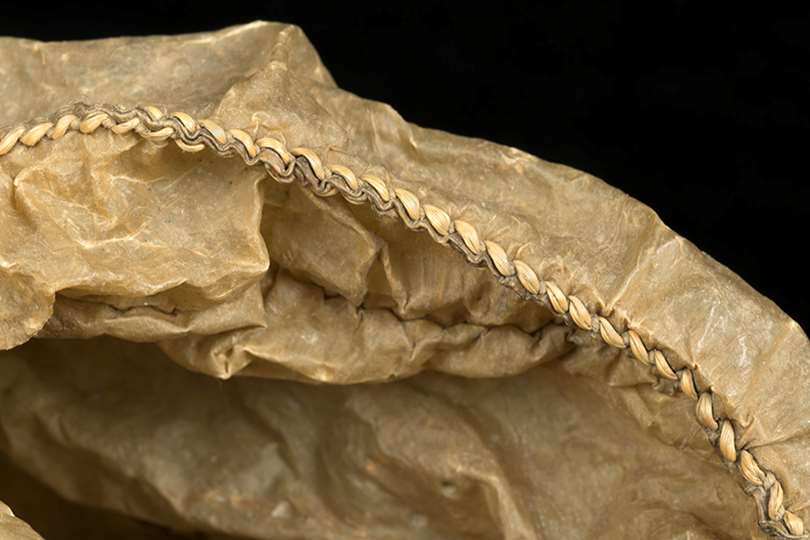 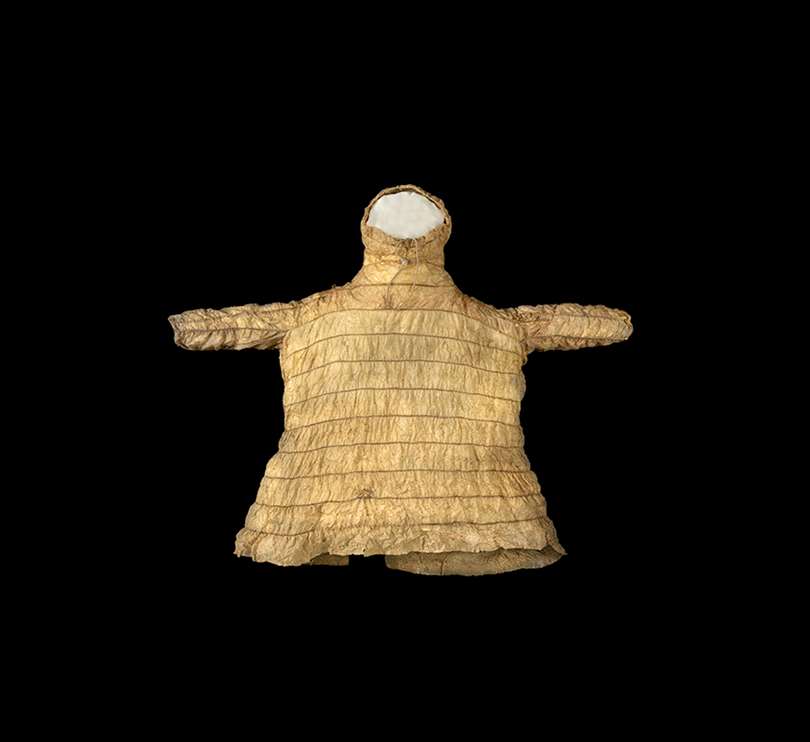 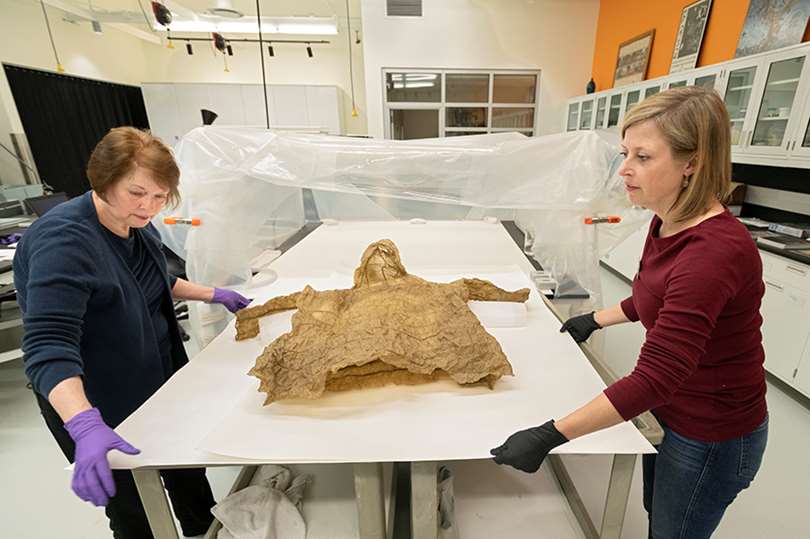 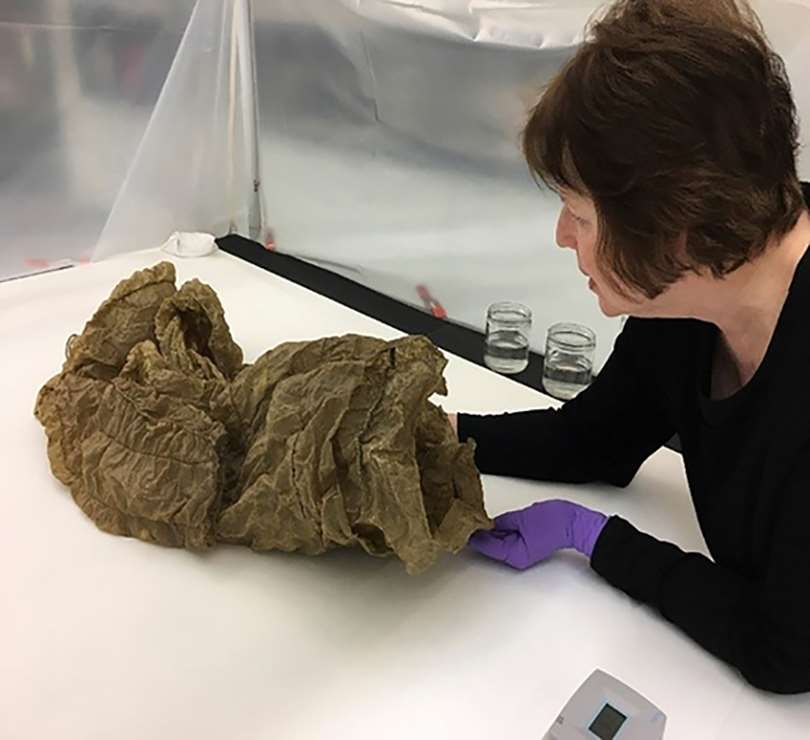 As part of the IMLS-AEC grant, three parkas from the anthropology collection received treatment to preserve them. These aren’t just any parkas—these are constructed from marine mammal intestine, most likely seal or walrus. The intestine is cleaned thoroughly and stretched to dry. It is split lengthwise to produce strips that are tightly sewn together with sinew and fibrous grass. These parkas are lightweight, strong, and waterproof. They are often embellished with other materials such as feathers, fur, and yarn. The parkas are used during fishing, hunting, and gathering activities or during ceremonies.

One of the parkas we treated (A1086.1) was acquired from Kwigllingok Village, Alaska. This parka dates to circa 1900 and entered the Museum collections in 1960–1970 in poor condition. It was brittle and twisted. We mapped out a treatment with the goal to expose the parka to a controlled source of moisture so it could be gradually unfolded, padded for shaping and support, and examined for condition and further treatment.

Denver Museum of Nature & Science conservator Jude Southward and contract conservator Jessica Fletcher constructed a tent of plumbing pipe covered with polyethylene plastic. A clear window was incorporated to keep an eye on the process. A monitor to record temperature and relative humidity was also placed in the tent. During the work day, the parka was humidified to 70% to 80% using a home humidifier. The parka was periodically pulled out of the tent for a few minutes to reshape it before it began to stiffen again. As it was gradually unfolded, the parka was reshaped and padded using delicate polyester fabrics that were first washed to soften their texture. Once the parka had regained its shape, various large tears were visible and were repaired using a material made from ox intestine, which is colorless and strong, adhered with rice starch paste. 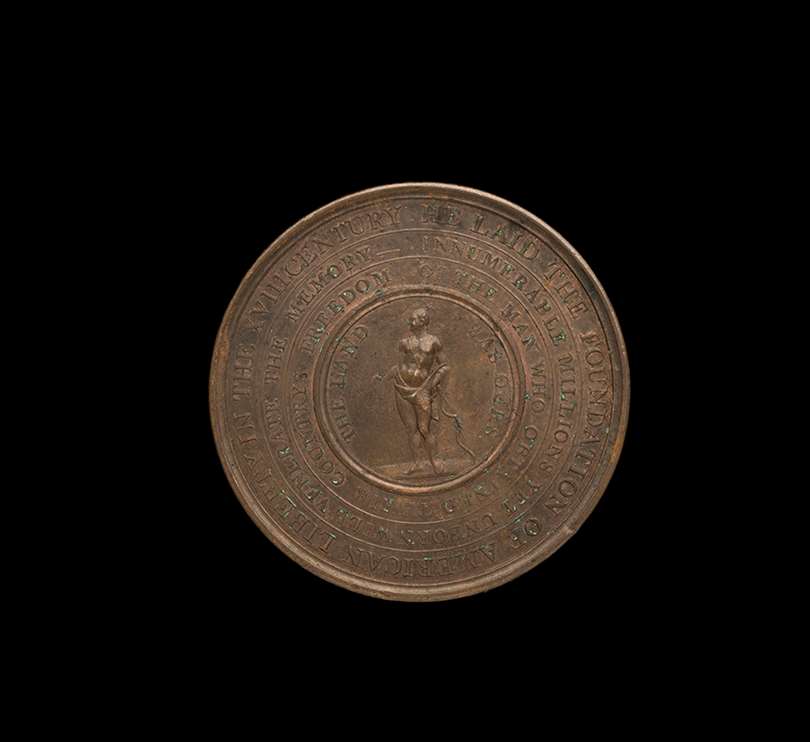 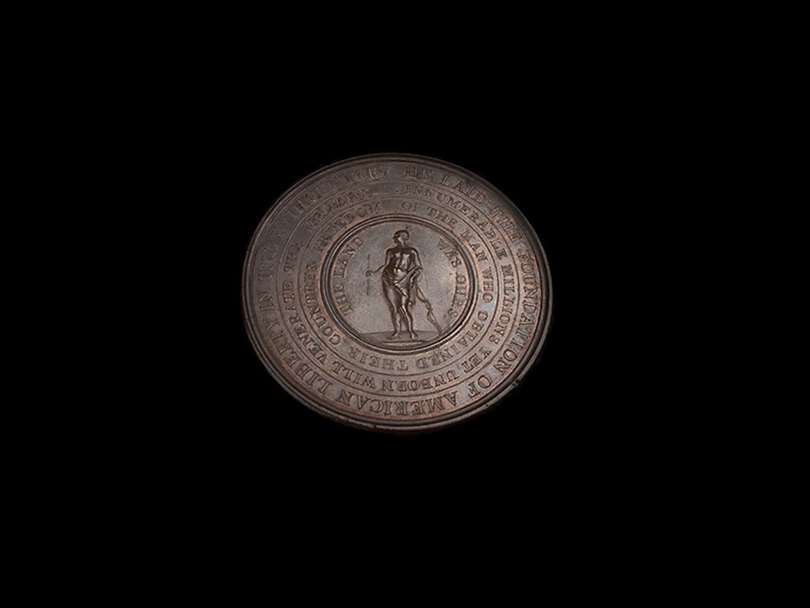 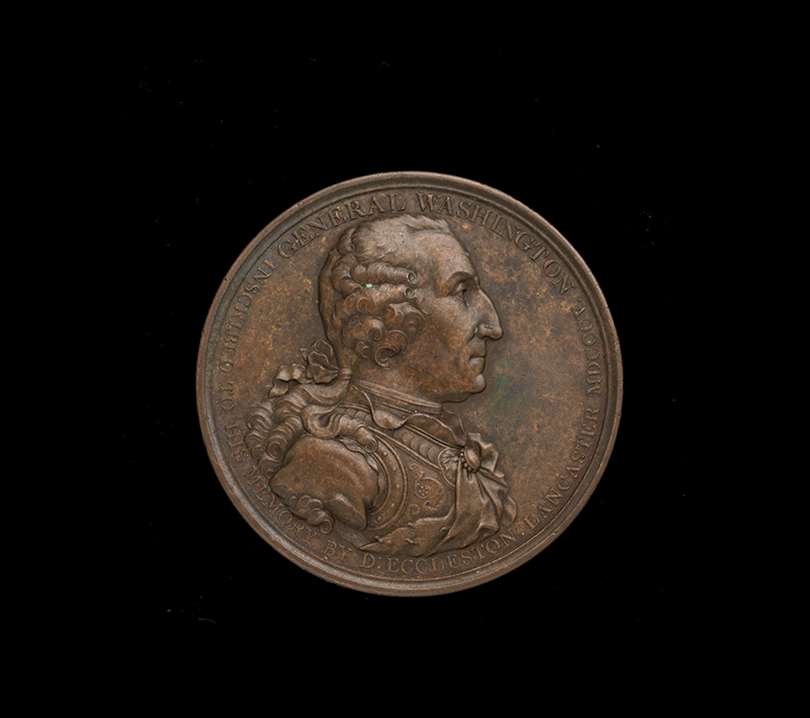 While researching the Indian peace medal collection, curators noticed small cavities of a light green and powdery material on the bronze George Washington medal (AC.9752). Further examination by conservation staff showed this material to be the active corrosion that is commonly referred to as “bronze disease.” This type of corrosion is damaging as it results in a continuous loss of metal and pitting.

The medal was placed under the microscope and the waxy corrosion was softened with mineral spirits and then removed mechanically from the small pits using the delicate end of a porcupine quill. The medal was then placed in a vacuum chamber with a corrosion inhibitor. The inhibitor must be used in conjunction with control of the environment, and the Washington medal is now being stored in an acid-free mount in low relative humidity.

The Egyptian Mummies exhibition at the Denver Museum of Nature & Science underwent renovation in April 2016. While the gallery was closed, two mummies, two complete wooden coffins, and a single wooden coffin lid were brought to the Avenir Conservation Center at the Museum for conservation treatment. The goal of this three-week treatment was to secure any loose surface and structural elements on the mummies and coffins prior to their transport to Children’s Hospital Colorado to undergo computerized tomography (CT) scanning and then for subsequent long-term exhibition reinstallation. Museum conservators evaluated the artifacts’ stability to guide the selection and implementation of a treatment strategy. Included in the 2016 evaluation were empirical observations and a review of 34 years of historic treatment documentation from work completed at a regional conservation center in 1982 and 1985 and at the Denver Museum of Nature & Science in 1998. The majority of conservation work undertaken previously involved securing loose areas in the decorative surface layers that cover the wood of the coffins. These decorative surface layers include the polychrome paint and ground layers on both coffins and the single coffin lid as well as the black layer on the black-coated coffin. Previous treatment of the coffins also included gap-filling of some wooden structural elements. The 2016 condition examination showed that many of the adhesive repairs were still holding well, and with only minor stabilization treatment in 2016, the coffins were able to withstand transport to a local hospital for CT scanning. 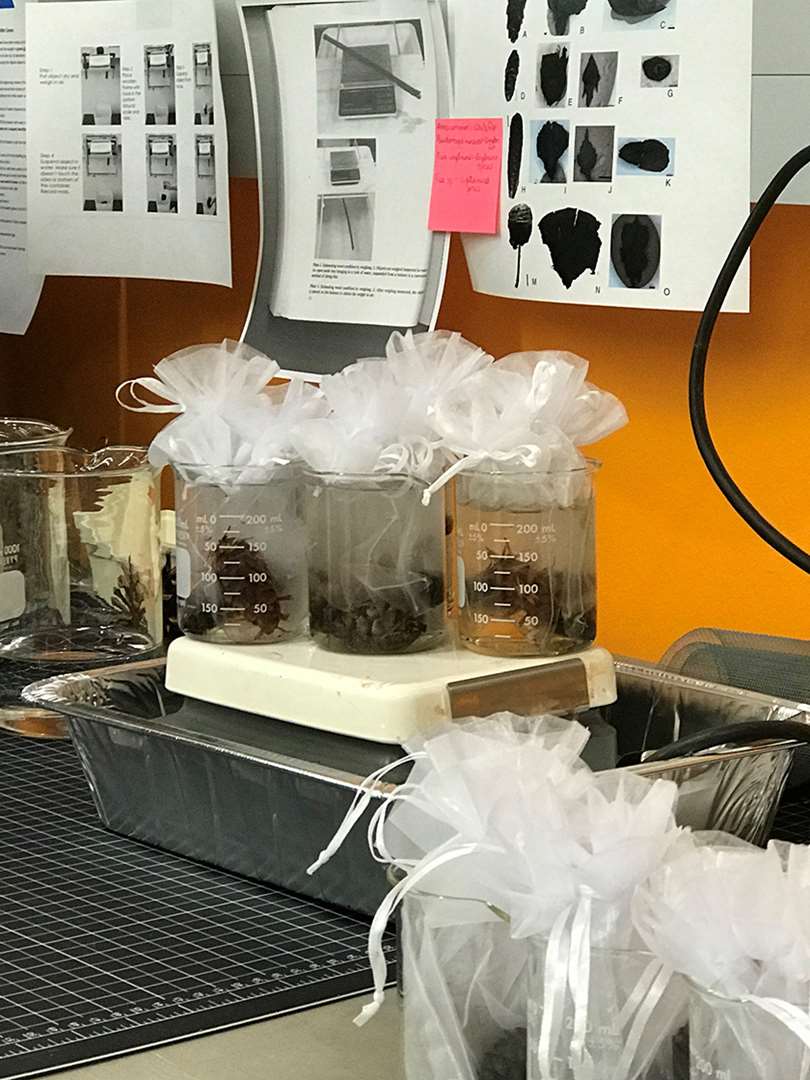 Conservation is in the process of stabilizing conifer cones from the Ziegler Reservoir excavation site near Snowmass, Colorado. This is a waterlogged Pleistocene site ranging from about 130,000 to 70,000 years ago that preserved a broad array of plant and animal life (including the famous Mastodons & Mammoths) (Johnson et al. 2014). Included in the floral remains were approximately 100 complete cones from four species of coniferous trees: White fir (Abies concolor), Douglas fir (Pseudotsuga menziesii), Engelmann spruce (Picea engelmannii), and a second spruce Picea, which could not be narrowed down to the species level (Miller et al. 2014). When the cones were excavated nearly 10 years ago, they were measured, placed in containers filled with water and a small amount of ethanol, and then placed in a refrigerator to be kept cool. In the short term, this kept the cones in a fairly good state of preservation. Now the Denver Museum of Nature & Science’s Earth Sciences Department would like to be able to handle and examine the cones outside of the jars, so they have asked Conservation to help with long-term stabilization.

The cones are comprised predominantly of cellulose. When cellulose material is recovered from waterlogged contexts, it has undergone a number of changes caused by decay, the breakdown of the cellulose and cellular walls, and the expansion and almost complete filling of the cells with water. This leaves the specimens weak and vulnerable to shrinkage and distortion as they dry out. In order to avoid this damage and to preserve their shape, conservators rely on several methods to remove water from the cellular structure and to support the damaged and decayed cellular structure with bulking agents. These methods have included using polyethylene glycol (PEG), chitosan (ground-up shellfish shells), and sucrose (table sugar) (Christensen et al. 2015; Cronyn 1990; Fink 2017; Parrent 1985).

The conservation of archaeological wood has been studied a great deal in the last 50 to 70 years, especially since large shipwrecks have been recovered from marine contexts, preserved, and displayed in museums (Hoffman 2001; Hocker et al. 2012). Because of these experiences, stabilizing treatments for conserving waterlogged wood are fairly straightforward and well published. Unfortunately, the treatment of conifer cones is not really mentioned in existing archaeological or conservation literature, and while being woody, the cones do not have the same cellular structure as wood. This introduces some challenges into the stabilization process.

Currently, we are performing some experiments on degraded modern Douglas fir cones to test previously published stabilization methods. We have chosen six bulking agents for the test cones, including polyethylene glycol (PEG) in a number of molecular weights (400, 1500, 3350, and mixed 400/3350), chitosan, and sucrose. To begin treating the test conifer cones, we initially rinsed them of any debris or biological growth that might be on them and, then, measured and photographed them. The cones are now immersed in small tubs with a solution that contains a wetting agent (water), a bulking agent, and a biocide to prevent fungal growth. As the cones sit in the solution, the bulking agent slowly penetrates the cellular structure. The amount of bulking agent to wetting agent is normally low to begin with, and the solution is changed at a set schedule, gradually increasing the amount of bulking agent to wetting agent to allow maximum permeation. How do we know this point? We measure the test cones once weekly to determine when the weight stops changing and stabilizes. Once this has occurred, the cones are removed from their solutions and either freeze dried or air dried slowly. The end result should be a specimen that is stable in air and retains as much of its original shape, color, and texture as possible. Once we feel we have one to two methods that will work well, we will begin treatment of the archaeological cones. 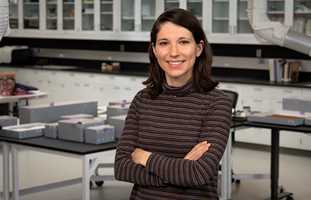 The Care and Preservation of Historical Brass and Bronze, by Clara Deck, Senior Conservator, The Henry Ford