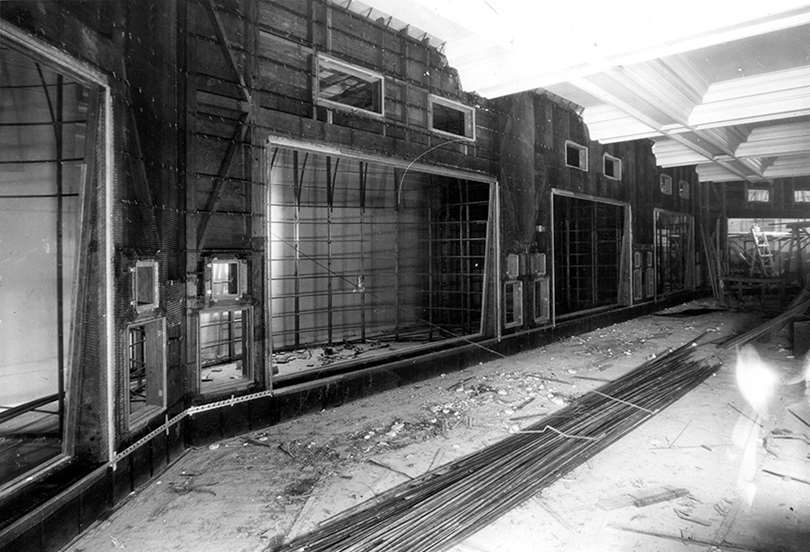 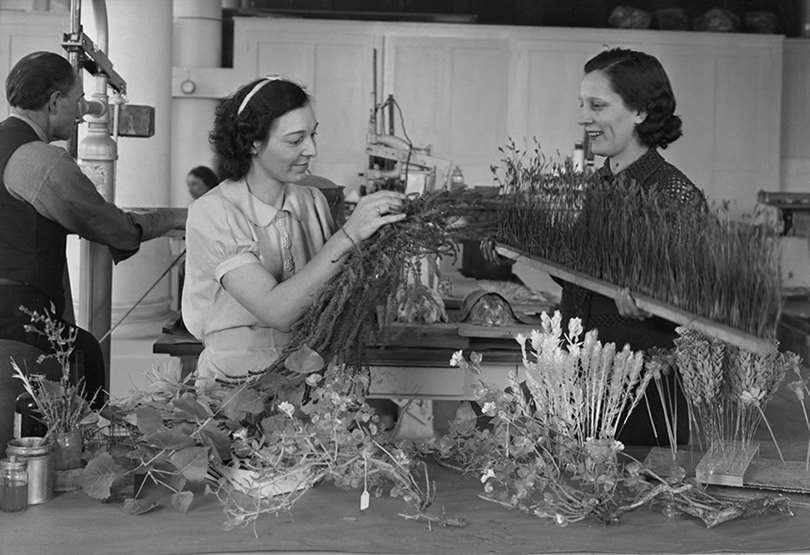 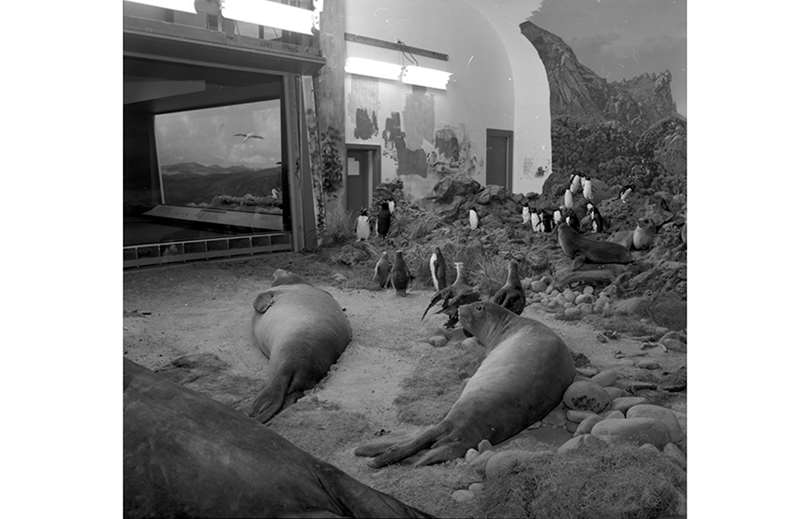 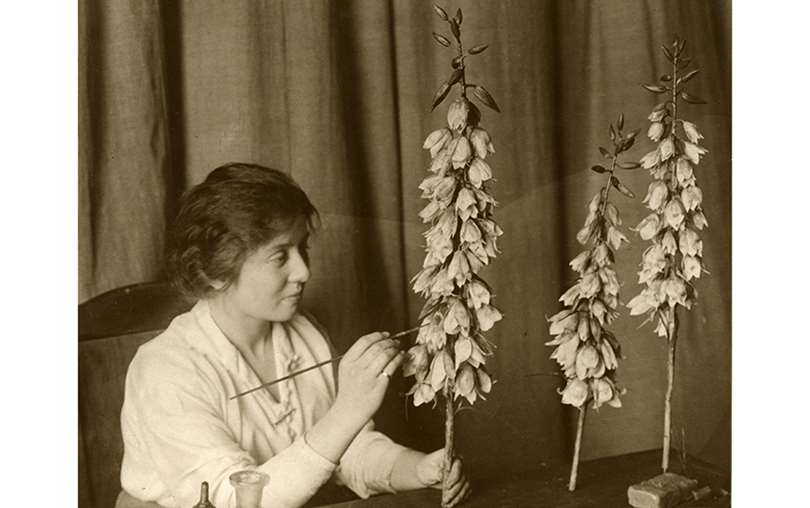 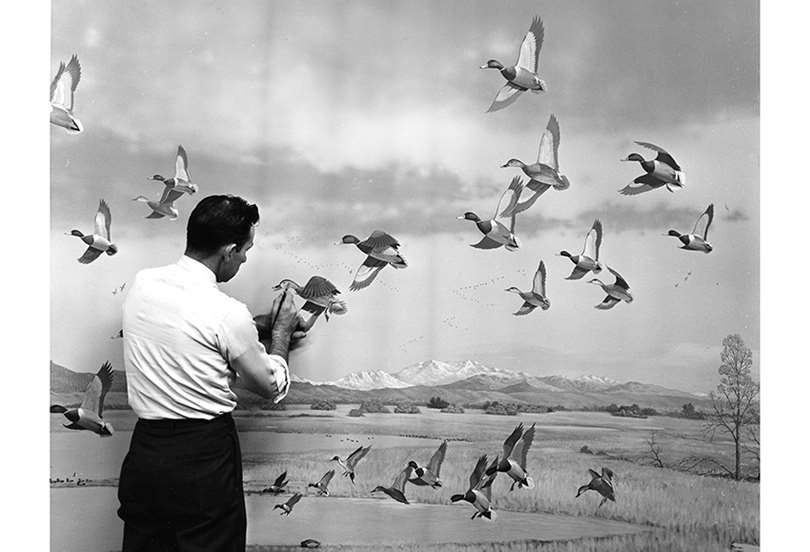 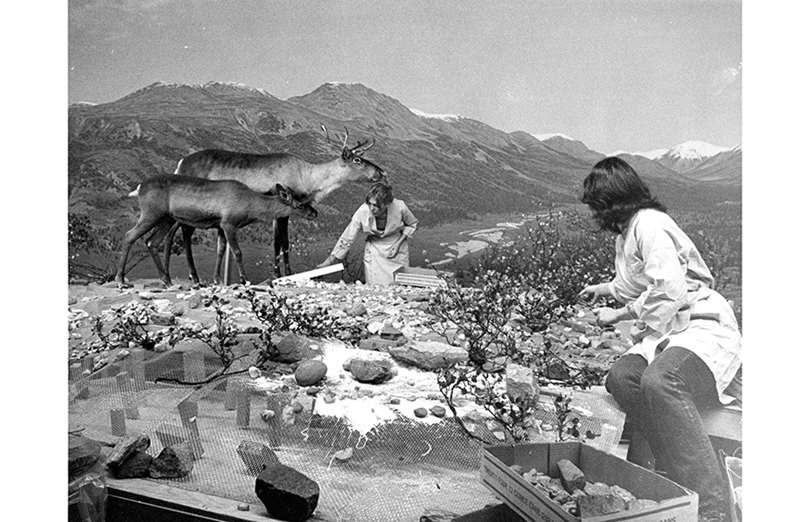 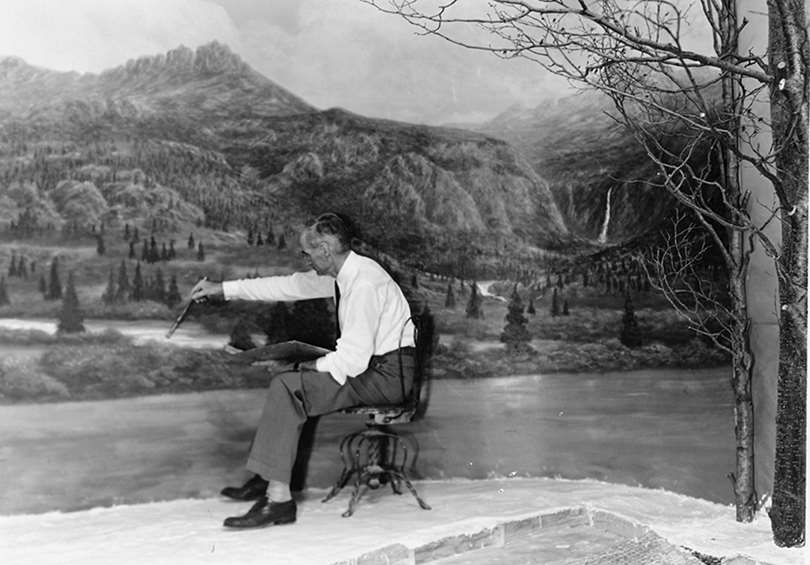 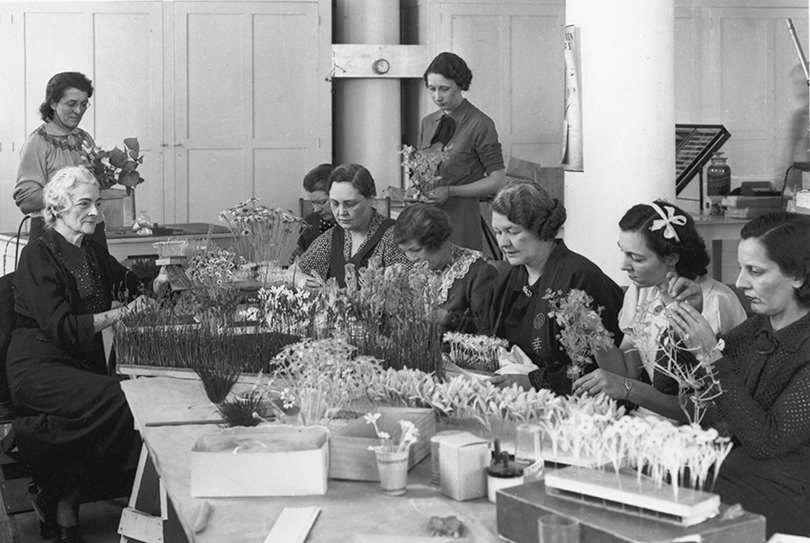 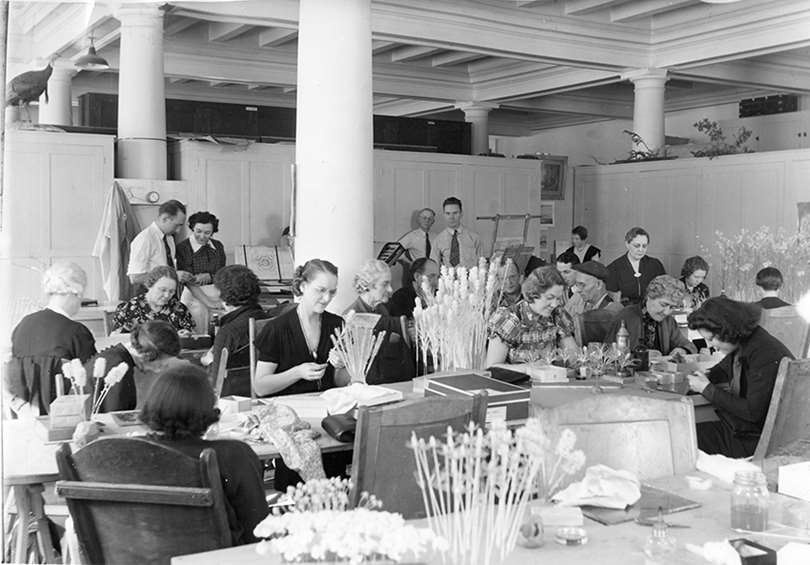 Browse through some of our historic photos from the Archives showing the making of our beautiful dioramas.

The Walter C. Mead Ecological Hall, now called Explore Colorado, was already an exhibit gallery (the Colorado Bird Hall) in 1908. Mounted glass frames and glass-sided “cabinets of curiosities” lined the walls, filled with birds and bird eggs and illuminated by light from windows. A central opening allowed air to circulate and natural light to reach the second floor. In 1936 the windows and floor opening were covered, and Mead Hall became the Museum’s first exhibit hall to have modern dioramas with compound-curved walls and ceilings, and even interior fluorescent lighting—newly patented in 1941. The curvature of the diorama shells, skillfully constructed of plaster smoothed over expanded metal lathe, made the art of background painting vastly more complex.  The theme was to be “life zones,” with dioramas sequentially representing locations and elevations around Colorado, one in neighboring Arizona.

Out of public sight, talented artists like C. Waldo Love filled their curved plaster “canvasses” with realistic scenes that captured every detail of the sky, clouds, landforms, plants, and—crucially—the spatial perspective from a visitor’s point of view. Even farther behind the scenes, a tremendous amount of work went into creating the three-dimensional components of the dioramas. Skilled tanners and taxidermists tanned animal skins and stretched them over unique hand-shaped body forms, making the mounted specimens as lifelike as possible—although usually in static, trophy-animal poses. In that day and age, taxidermy body forms contained asbestos, and specimens were treated with arsenic and DDT to ward off insects—unknowingly posing a danger to exhibit artisans as well as pests.

From 1936 through 1940 efforts to bring the country out of the Great Depression were a great boon to the Museum. Workers funded by the federal Work Projects Administration (WPA) more than doubled the staff’s size. In addition to rearranging and re-cataloging varied collections and chipping fossils out of rock, WPA workers in a backroom workshop formed and painted “accessories”—the remarkably lifelike grasses, plants, stems, leaves, and blossoms that makeup diorama foregrounds—a vital role later filled by volunteers. They produced 56,031 leaves and 5,200 flowering stalks in 1937 alone; by 1940 there were three times as many.

Painstakingly placed on wooden foreground flats, diorama foregrounds work in concert with the background painting to create the illusion of seamless perspective and to recreate the habitats of the stars of the show: the animals themselves.

Realistic and high-quality habitat dioramas are early examples of immersive—albeit passive—museum environments, and quickly became a Museum hallmark and tradition. Many more dioramas, reputed to be some of the best in the world, were completed at the Museum over the years, including the South America Hall, completed in1929 and redone in compound-curved diorama shells in the 1950s; the Australia Hall in 1959 and South Pacific Islands Hall in 1962–1966; the Galápagos Islands dioramas in 1968; the Alaska Hall in 1970; the North American Wildlife Hall in 1982; and the Helen K. and Arthur E. Johnson Botswana Africa Hall in 1983.

To learn more about the history of the dioramas click here: